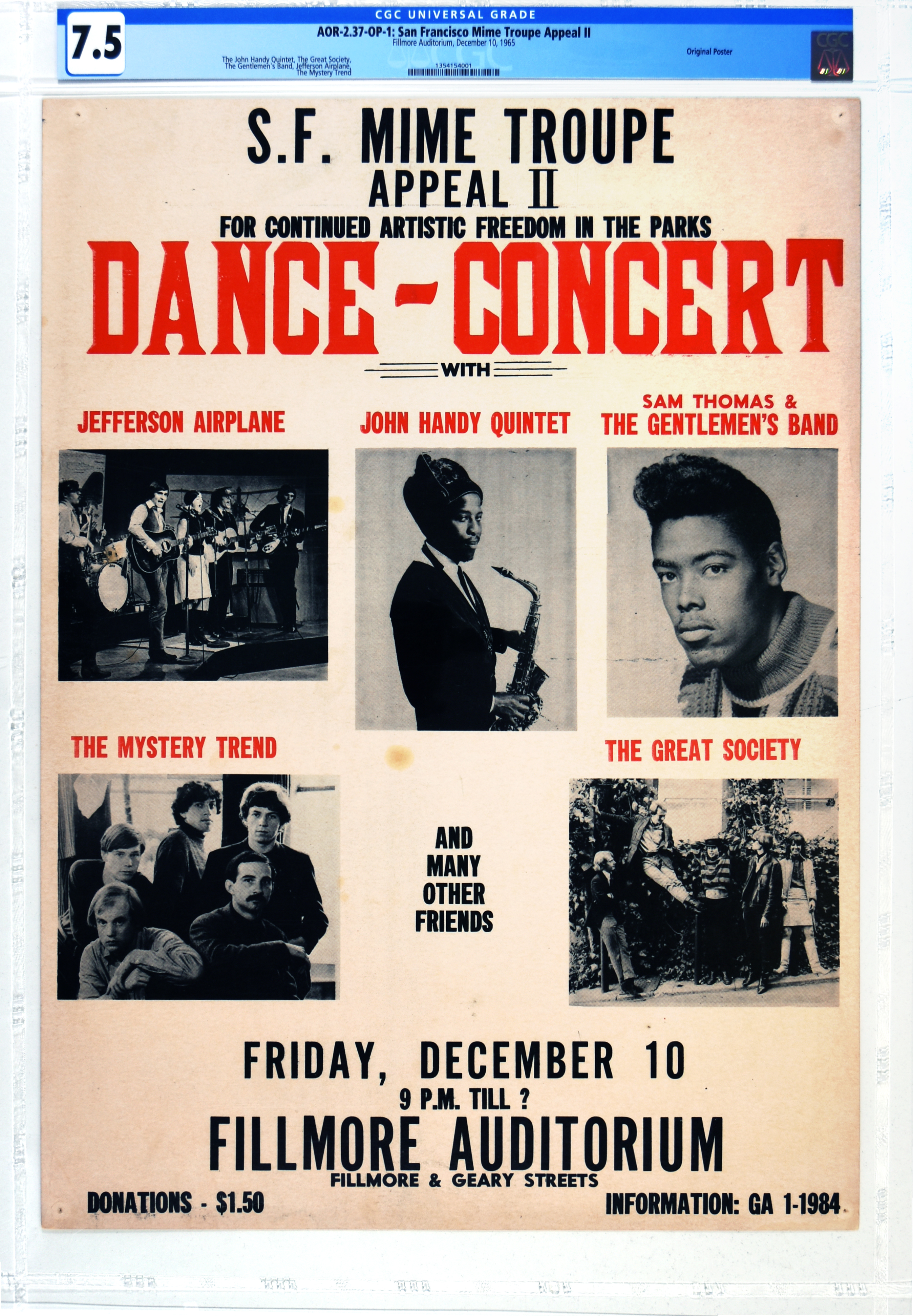 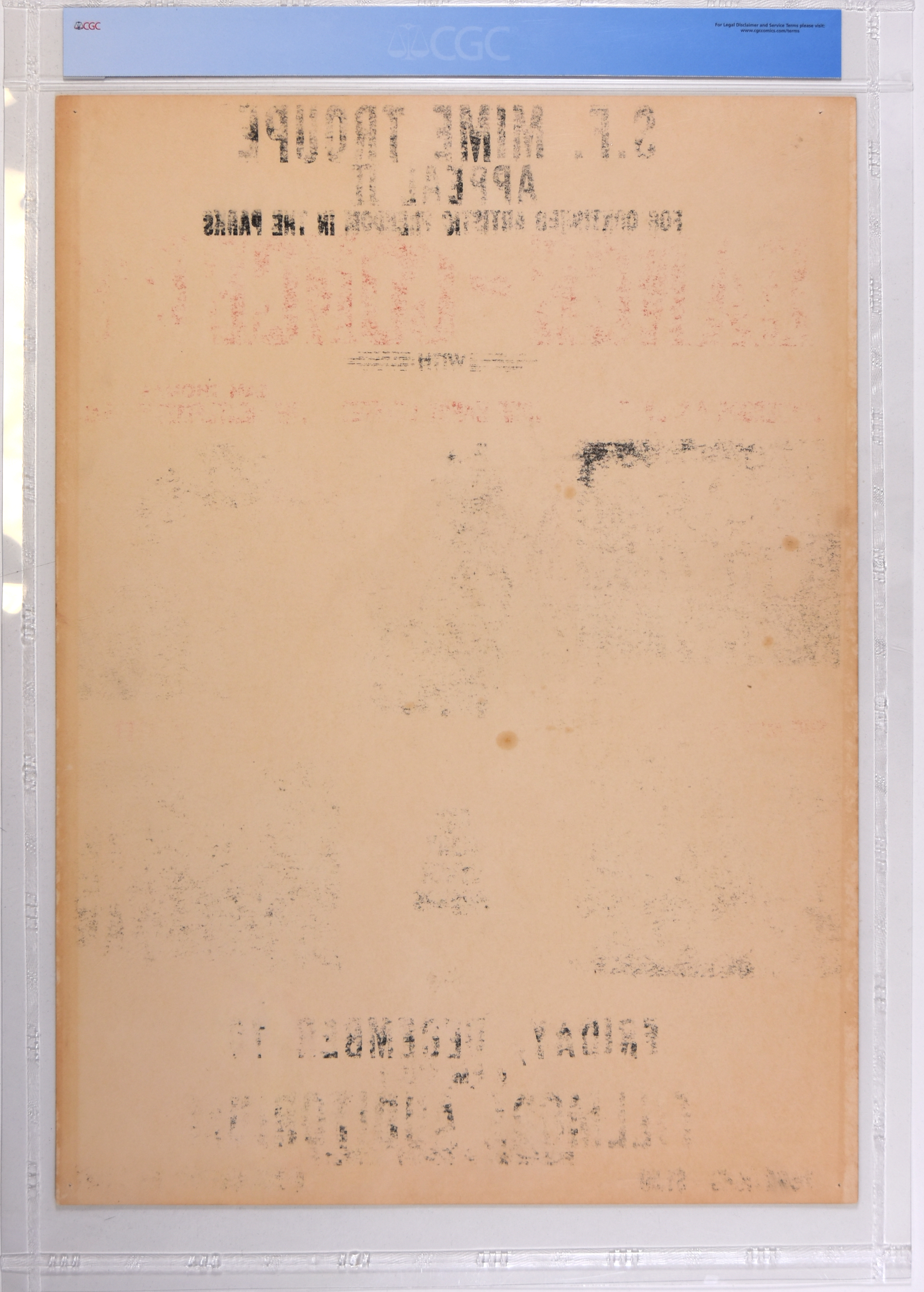 This lot will be accompanied by a Letter of Provenance attesting to the fact that it resided in the historic Early '66 Time Capsule Collection one of the most exciting and important concert poster discoveries of the past 20 years.

Let's face it the reason 1960's concert posters are so compelling and collectible is because these posters are NOT just pieces of art they are legitimate pieces of counter-culture history!

When it comes to historical importance this poster just may appear at THE VERY TOP of the list.

Because this poster represents the very FIRST Bill Graham promoted concert at the Fillmore Auditorium!

But there is more...MUCH more.

In addition to showing 1960's luminaries such as Jefferson Airplane and Grace Slick's The Great Society this poster promises "and many other friends".

And what "friends" they were!

This benefit concert was also the VERY FIRST Grateful Dead Concert. Prior to this historic event the band was known as The Warlocks.

According to Rock Scully's Living With The Dead the Grateful Dead played Little Red Rooster I Know You Rider Midnight Hour and Early Morning Rain.

Critically Important no tapes exist of this show making this poster the only remaining tangible artifact from this historic evening!

But there is more... MUCH more!

How rare is it?

It is estimated that maybe a handful exist in ANY condition.

It is so rare that this is the very FIRST specimen to appear in any public auction anywhere!

And what a specimen it is! 100% ORIGINAL with no restoration of any kind. Just a single tack hole in each corner one tape pull and a small spot of discoloration are the only significant flaws!

Could easily be considered amongst the Finest Known!

This poster does not have a STORY it has HISTORY!

Bill Graham became the S.F. Mime Troupe’s manager in 1965.  Their founder R. G. “Ronnie” Davis was indicted for performing in public parks without a permit. In response Graham organized the first Mime Troupe fundraising event on November 6th 1965 to raise money for Davis' defense. This event was so popular that Graham held a second fundraising event on December 10th 1965 which is the event this poster was created for.

It is widely reported that 3500 people were in attendance and the event went way into the early morning hours of December 11th.

It is with tremendous pride that we now offer this incredible Museum Piece the first such specimen to appear at public auction ANYWHERE.

Several things have to come together to create the opportunity you are now perusing:

First... and most important... you have to locate the poster! This is all but impossible UNLESS it suddenly appears out from nowhere 50+ years later. And that's exactly what happened here. This poster is OUR VERY FINAL OFFERING from the historic Time Capsule collection. easily the most important concert poster discovery of the past 20 years.

News of this collection has traveled around the world and has yielded such classic Rarities as the FD-2 The Grateful Dead Longshoreman's Hall Trip Festival The FD-1 handbill and many other rarities too numerous to mention. This is our last rarity from this collection WE SAVED THE BEST FOR LAST!

Second... you have to get the poster third party authenticated and graded by CGC. It's now widely understood that this market is being driven by thousands of new concert poster collectors that are entering the market due to their comfort confidence and familiarity with independent third party authentication and grading of collectibles. In today's market no one but the most seasoned and experienced collector would dream of parting with their hard earned money solely based on the opinion of the person trying to sell the poster. This poster is being sold with a condition determined by an independent authority NOT US!

Third... you have to find an auctioneer with the audacity to offer a Major Rarity such as this TOTALLY UNRESERVED AND WITH A STARTING BID OF JUST $1.00! At PAE we often say we are leading a Rock Poster Revolution. This revolution is based on LEVELING THE PLAYING FIELD by giving ALL COLLECTORS an equal and honest chance to acquire major rarities with independent authentication and grading at a price that THE MARKET DETERMINES NOT US.

Before this Revolution began collectors at the very highest level secreted away items like this trading amongst themselves too scared to let the market determine values. Now that the Revolution is underway and thousands of new collectors are routinely creating record prices in our auctions those looking to sell are clamoring to sell through us!

Which brings us to the opportunity at hand. When will all three of the above factors come together to present this opportunity again?

We along with the rest of the world will be watching to see what value the market attaches to this Classic Museum Rarity at this specific moment in time.

A note about value: We did handle a previous specimen of this poster over 10 years ago Pre-Revolutionary days. We sold the poster privately for $36 000. Of course it was not independently authenticated as CGC did not exist and it was not as fine quality as the specimen offered here.

Condition Details – 100% Original with no restoration. Single tackhole in each corner 1/2" discoloration in the middle of the poster tape pull on the right edge on back. View the detailed high res photo of this lot. Click on the thumbnail photo to see an enlarged photo. Click a second time on the magnifying glass in the upper right corner of the enlarged photo. A super high res image with every millimeter will now be clearly displayed. For a personalized eyewitness examination call 410-464-6180 11:00 am to 6:00pm eastern.