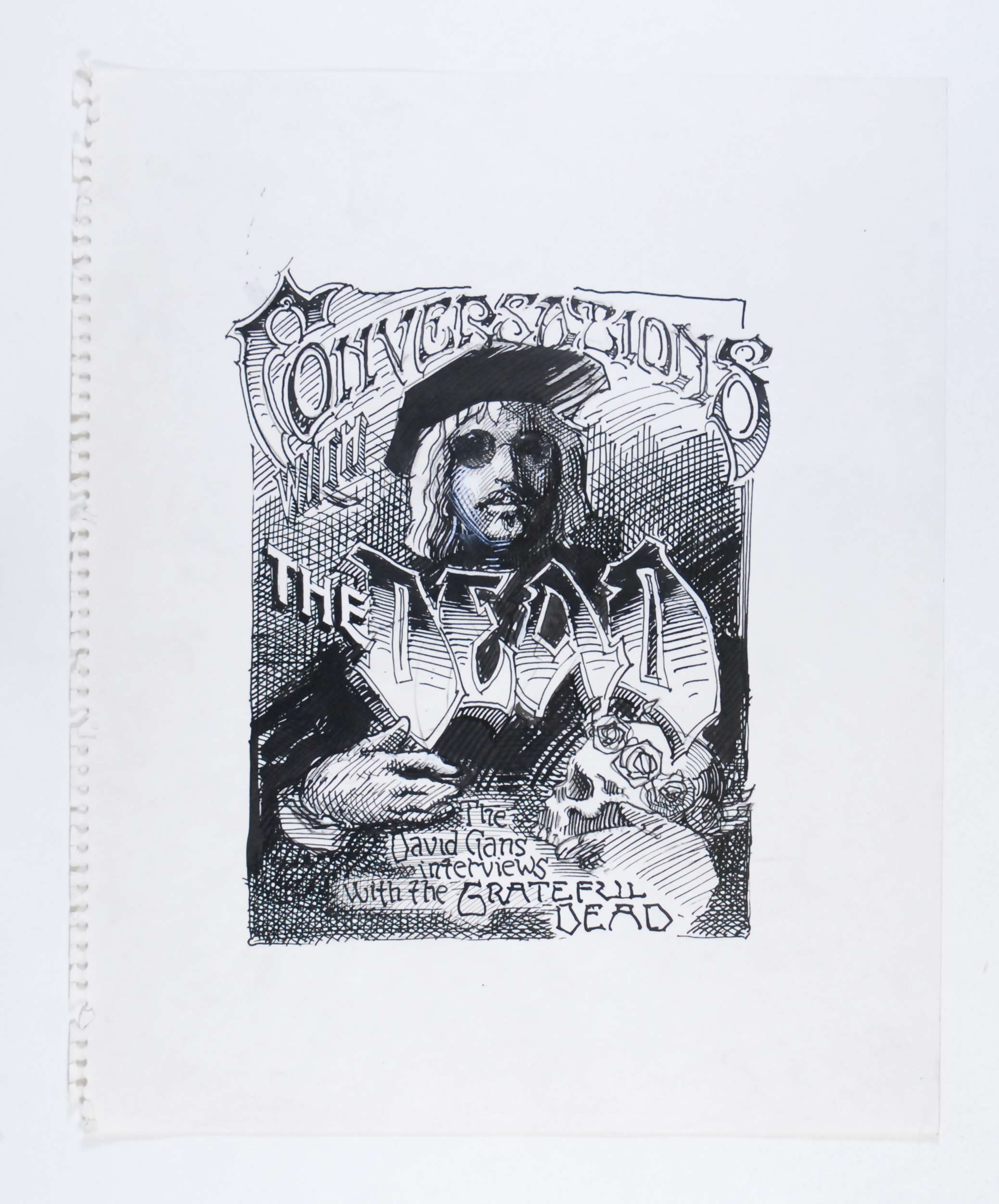 It's an absolute pleasure to offer this ORIGINAL ART by the late great master Rick Griffin! He undoubtedly had a solid track record for memorable album cover art associated with bands like The Grateful Dead and Quicksilver Messenger Service as well as his trademark lettering style for several other bands’ graphics throughout three amazing decades. It goes without saying that we at PAE are huge Rick Griffin fans.

This is an ink on paper Preliminary Drawing concept idea he was developing for the book cover to be used for the David Gans book "The Grateful Dead Interview Book -- Conversations with the Dead". This sketchbook page masterpiece was produced in 1990 when he was experimenting with different ideas for the cover art of the book which was published a year later. The final art used for the first edition contained elements of this preliminary drawing -- most noticeably the hand holding the rose-crowned skull. The Hamletesque portrait of David Gans was a crossover Griffin was integrating with existing ideas he considered relating to Shakespeare's "Hamlet".

The author David Gans is a self-professed Deadhead and was host of the ever popular "The Grateful Dead Hour" broadcast. For this book he asked Jerry Bob and the rest of the band the questions their fans would have asked if given the chance. Gans also reached far beyond the musicians talking with recording engineers road crew and anyone who had the coveted opportunity to witness the Dead's decades of music-making. The legendary artwork of Rick Griffin being requested to grace the cover of a book with such high importance was a natural choice. This concept drawing provides special insight to the artist's creative process toward the final completed work. A unique treasure in its own rite this piece of original art is ONE OF A KIND and will not surface again!

In recent years we have witnessed a huge increase in demand for Original Art by collectors worldwide. The reason is simple. In most cases a preliminary drawing like this does not make it outside the artist’s circle of immediate family or personal possessions. So when something like this DOES surface its uniqueness and desirability flourishes quickly. This piece is an original page out of one of Griffin's sketchbook with the perforations from the ringed binder evident along the left edge. The rest of the page is in extremely crisp and clean condition. It belonged to the artist and was subsequently acquired by a well known collector of Griffin’s work. Grateful Dead collectors should not overlook this truly unique lot!

Artwork – Conversations With The Dead

Condition Details – This original art is not graded. 100% Original with no restoration. View the detailed high res photo of this lot. Click on the thumbnail photo to see an enlarged photo. Click a second time on the magnifying glass in the upper right corner of the enlarged photo. A super high res image with every millimeter will now be clearly displayed. For a personalized eyewitness examination call 410-464-6180 11:00 am to 6:00pm eastern.

*****This piece is available for inspection at our gallery by appointment. *****