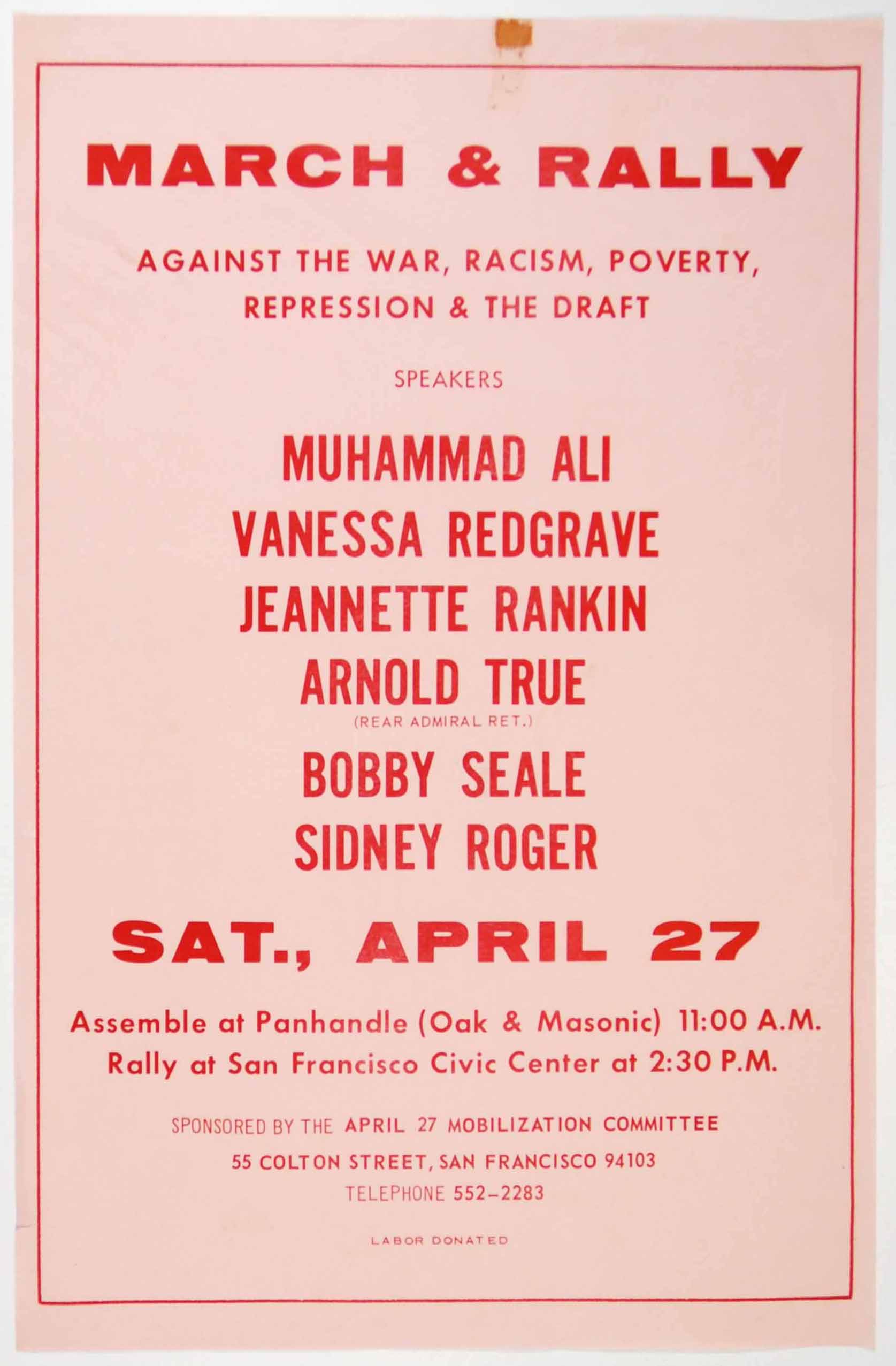 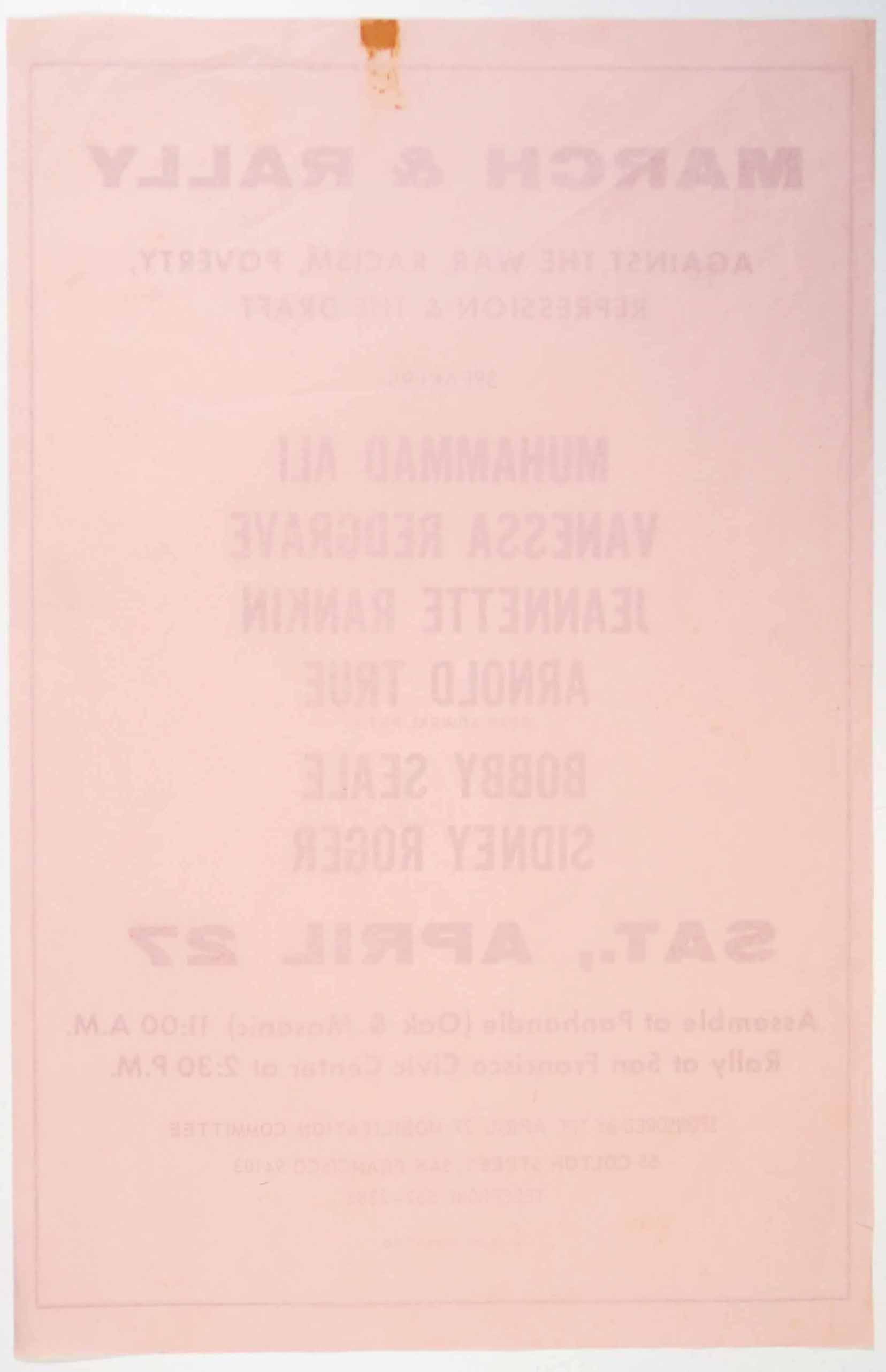 This poster just emerged from a collection assembled by one of the top experts of historic material from the late sixties and we couldn’t be more pleased to offer it in our auction! It’s without a doubt an ultra rare PERIOD PIECE which reflects a profoundly important period in American History. To quote some words from the great Indiana Jones we'll start by saying: "IT BELONGS IN A MUSEUM!"

The March & Rally in San Francisco on April 27 1968 was a gathering for protesting the War in Vietnam as well as racism poverty repression and the draft. The assembly began 11am at The Panhandle near Golden Gate Park with a March to the San Francisco Civic Center for a rally a few hours later.

One of the most important factors about this original poster produced for the event is the appearance of legendary boxing star Muhammad Ali. During this time Ali became a popular speaker at colleges and universities across the country something which is very unusual for a prizefighter. But he wasn’t speaking about his boxing career. He was speaking about his personal rights and religious beliefs considering himself a conscientious objector to the Vietnam War.

Exactly one year before this rally in San Francisco Ali refused to submit to his draft for the US armed forces going to Vietnam and was arrested. His boxing license was suspended and his championship title was stripped from him. Soon after Ali remained unable to obtain a license to box in any state for another three years.

"War is against the teachings of the Qur'an. I'm not trying to dodge the draft. We are not supposed to take part in war unless declared by Allah or The Messenger. We don't take part in Christian wars or wars of any unbelievers. Why should they ask me to put on a uniform and go ten thousand miles from home and drop bombs and bullets on brown people in Vietnam while so-called Negro people in Louisville are treated like dogs and denied simple human rights?" - M.A.

Although he appeared at many events speaking publicly during this time he remained very careful about having his name printed on large quantities of any posters or promotional material because of any impact it would have had on his conviction. Extremely low numbers of promo material from the era actually bear his name in print even though witnesses and news sources would later report he attended and spoke.

Ali’s refusal to surrender to the draft and publicly standing up for his views had a HUGE impact on the civil rights movement and inspired a countless number of additional African-Americans writers and artists. On June 28 1971 the Supreme Court overturned Ali's conviction by a unanimous 8–0 decision.

The Vietnam conflict and the civil rights movement were huge public topics in 1968 and San Francisco’s bohemian youth community was not sitting on the sidelines. Promotional material like this poster were distributed to be hung on phone poles and local retail outlets. The tape stain at the top center of this example provides evidence of how this piece was originally hung.

Not only were very few printed but very few people had the insight to remove and safely store a piece like this only for it to be un-earthed decades later. This original poster was printed on super thin paper making any chance of preserving it in absolutely pristine condition extremely slim.

We have only one record of another example of this poster ever surfacing in a public auction. Its condition was much lesser quality than this one here and it sold for over $9 000 in 2009.

Condition Details – PINHOLE FREE! 100% Original with no restoration. Super thin paper. 1/4” edge tear bottom left tape stain top edge light creases and handling. View the detailed high res photo of this lot. Click on the thumbnail photo to see an enlarged photo. Click a second time on the magnifying glass in the upper right corner of the enlarged photo. A super high res image with every millimeter will now be clearly displayed. For a personalized eyewitness examination call 410-464-6180 11:00 am to 6:00pm eastern.