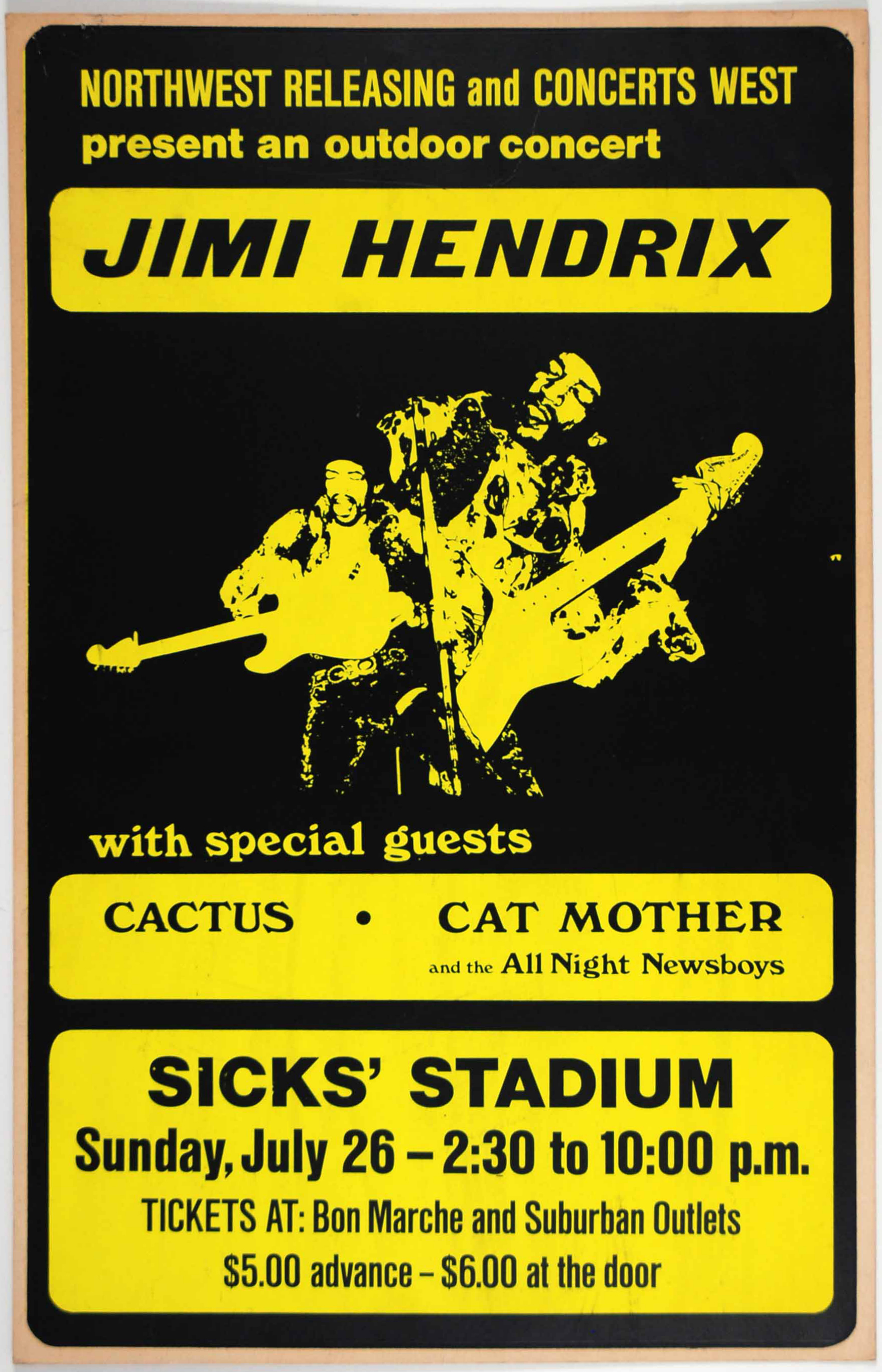 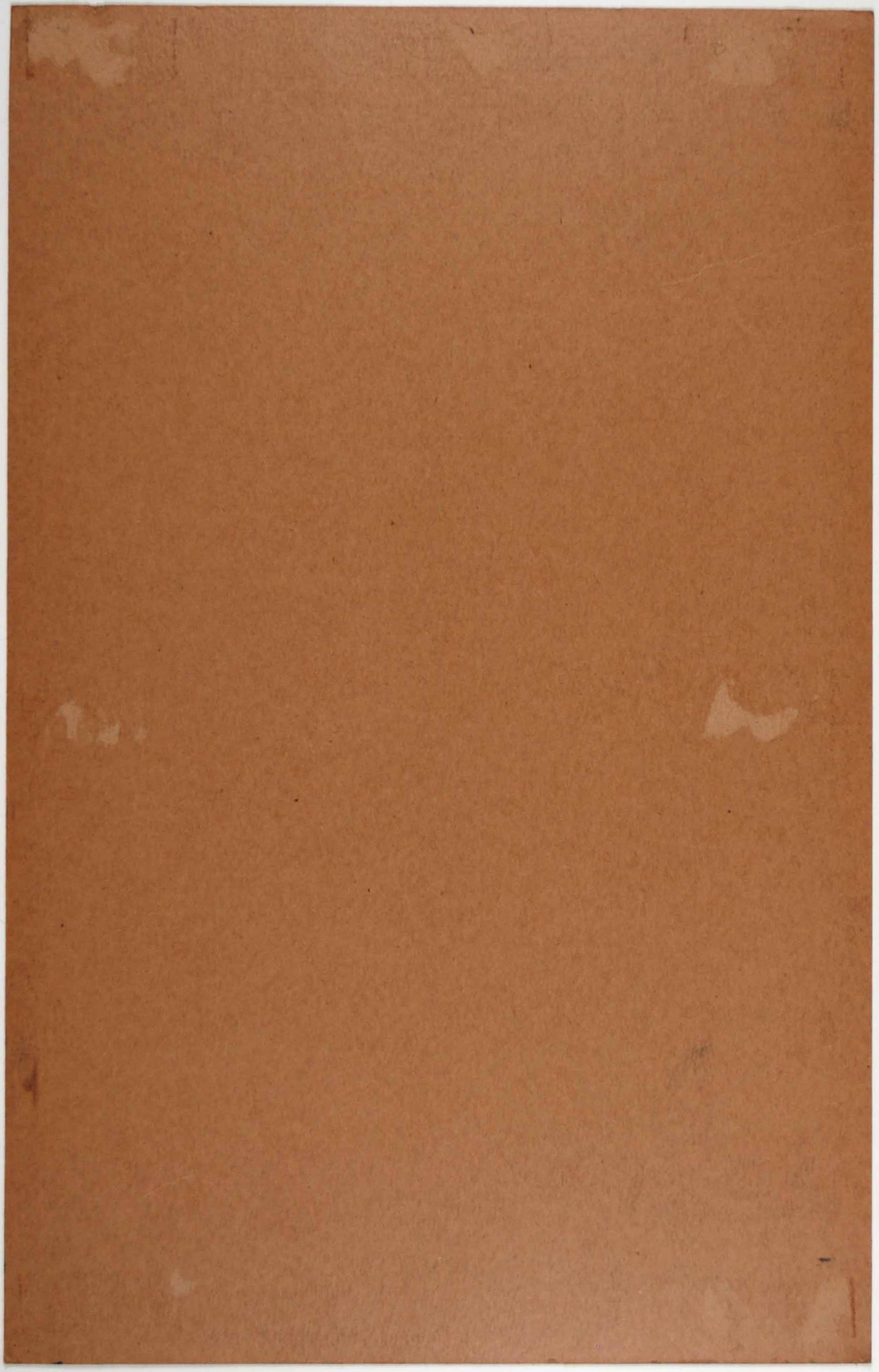 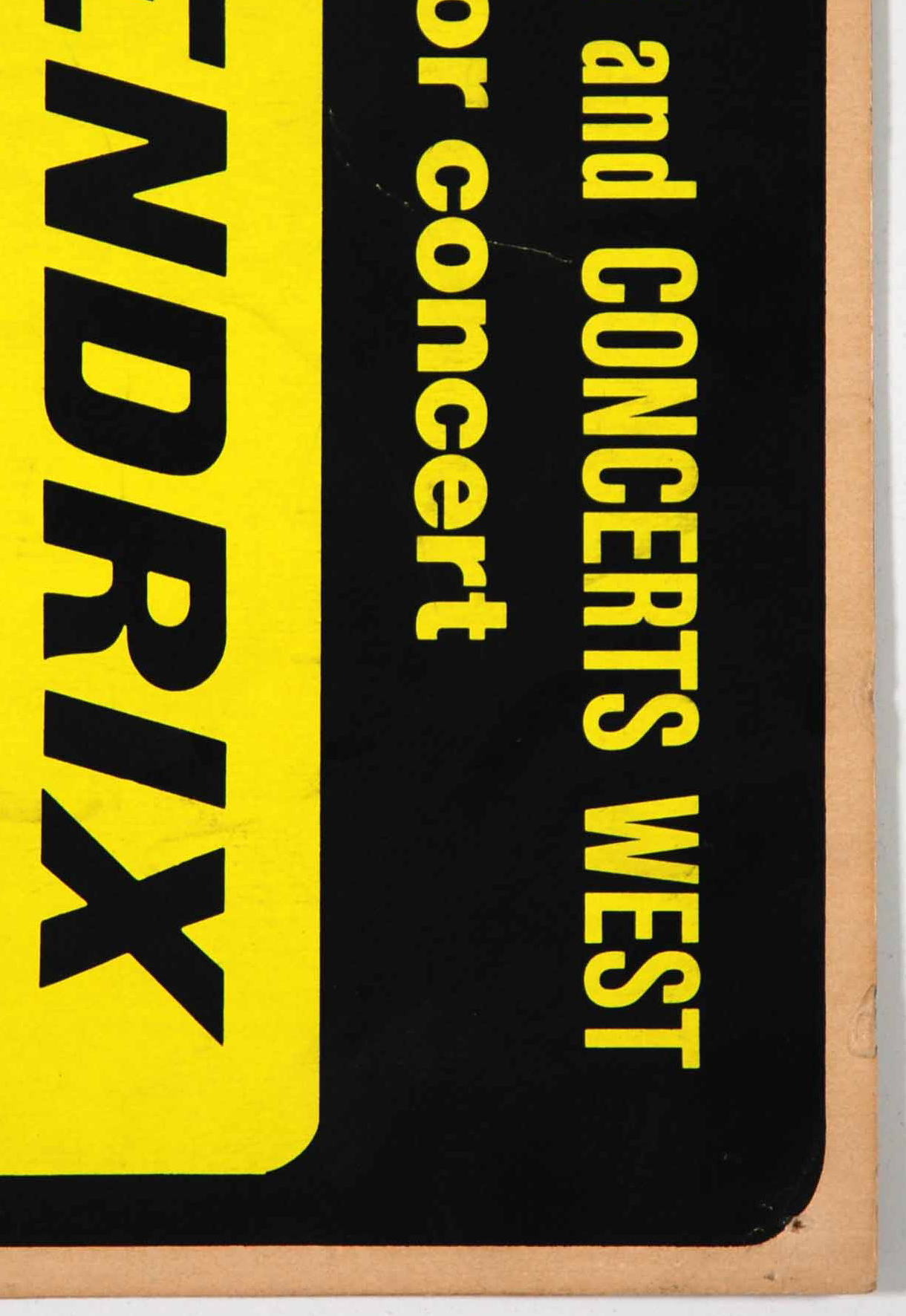 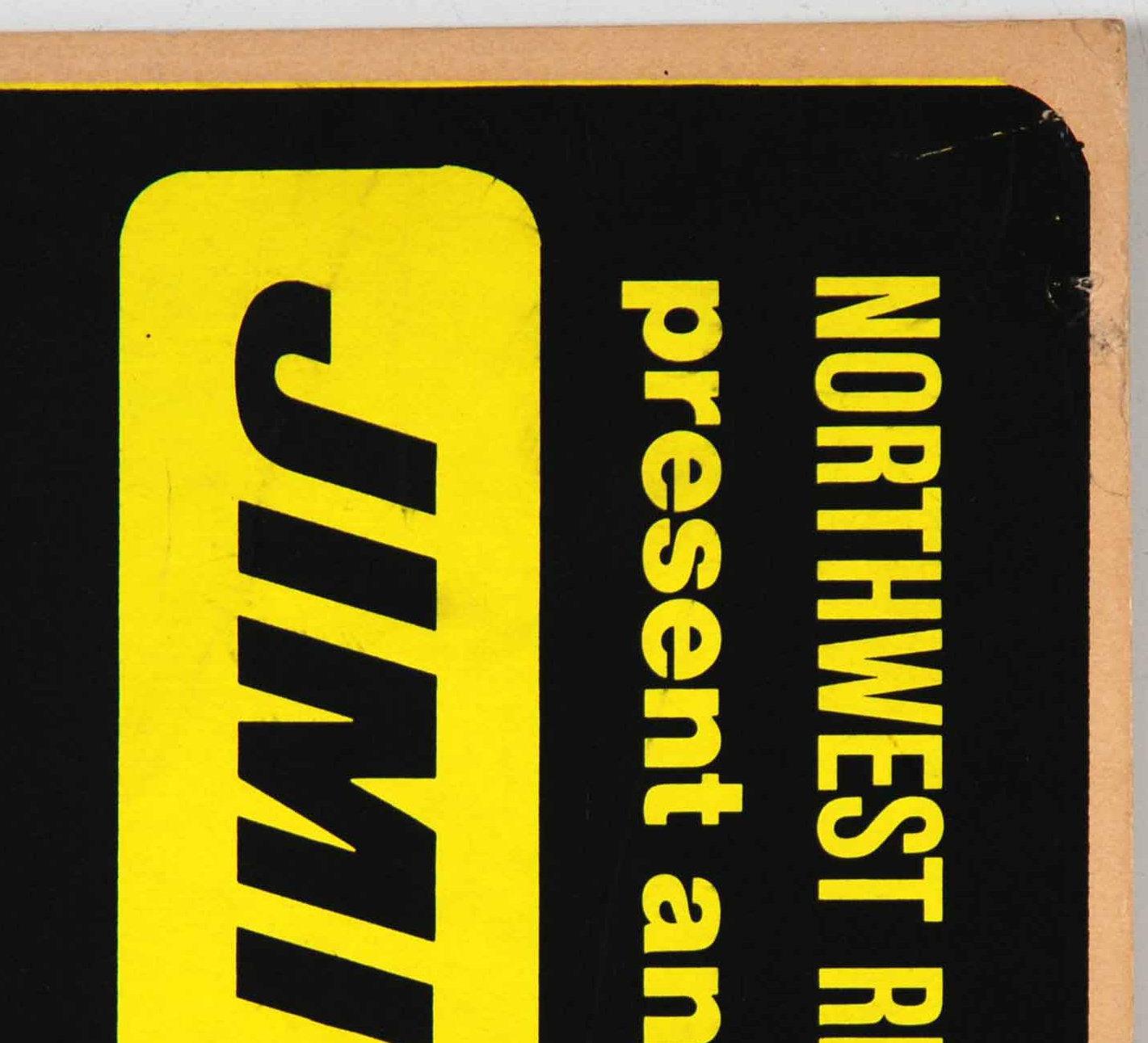 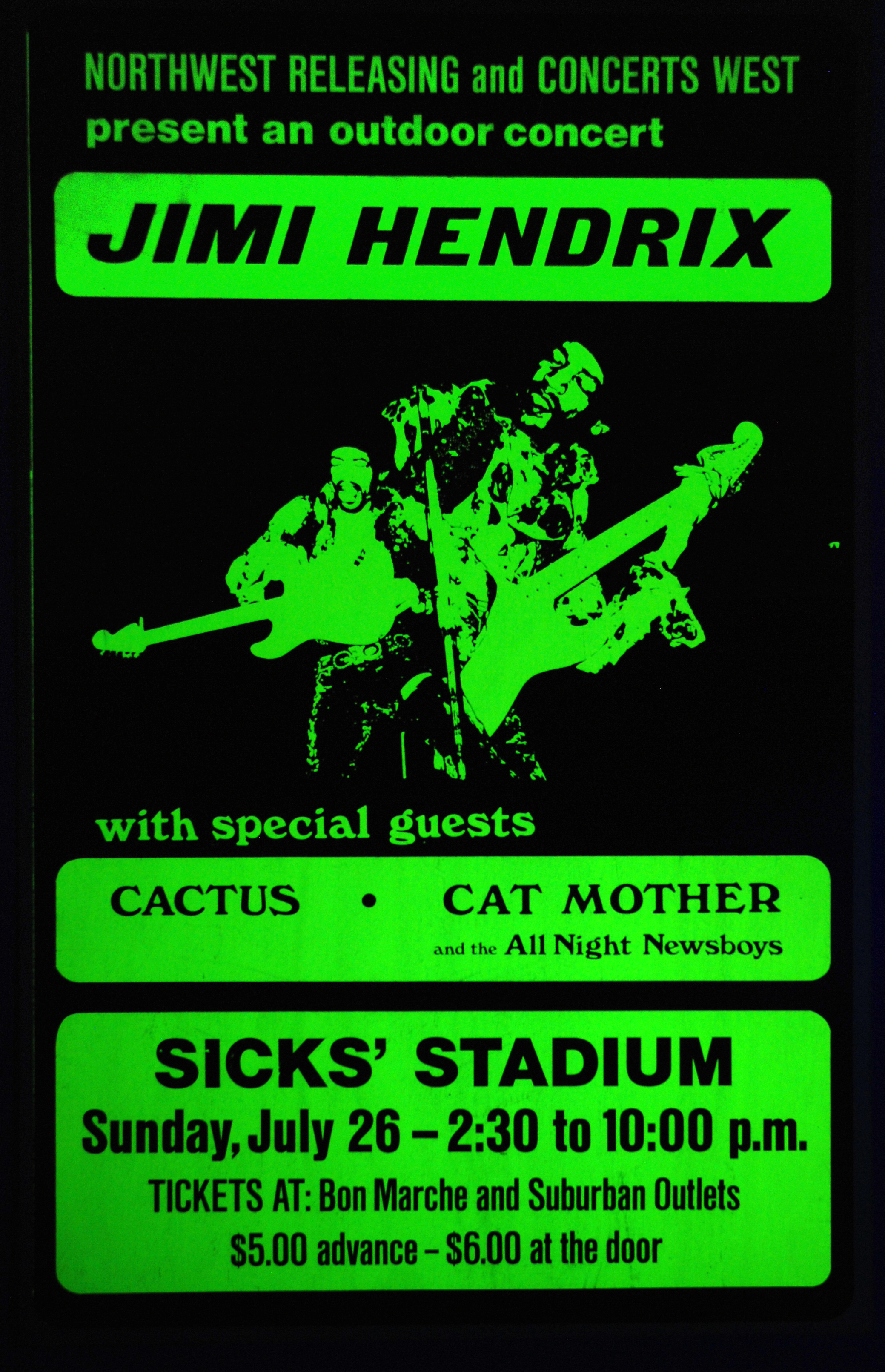 It’s with great pleasure we can offer this exceedingly rare Original Cardboard Jimi Hendrix concert poster for the FIRST TIME in our auction. It was produced for the legendary guitarist’s appearance at Sicks’ Stadium in Seattle Washington on July 26 1970. This concert took place less than two months before Jimi’s sad passing and was his second to last concert performed in America.

During July 1970 Hendrix spent several weeks in New York recording new material at Electric Lady studios. The sessions were interrupted by a quick jaunt to the west coast for 2 shows the first in San Diego on July 25th and this concert in his hometown of Seattle on the 26th. When he arrives he’s met at the airport by a large gathering of friends and family.

The concert that evening at Sick’s Stadium was slightly hampered by rain however Jimi’s performance featured blistering versions of newer songs like “Hey Baby (New Rising Sun)” and “Freedom”. Hendrix’s father and sister were backstage during the show. Cactus Cat Mother and the All Night Newsboys also performed opening sets. Three days later Jimi traveled to Hawaii for his last show in America before traveling to Europe.

This treasure is a classic boxing style concert poster printed on thick cardboard by the Washington Printing Company. The sharp yellow layout exhibits a double photo of Hendrix in the center with a black background. The poster looks simply AMAZING under black light with ultra bright color and three-dimensional visuals (see photo #5). Advanced collectors know that Pre-Concert First Printing cardboard material featuring Hendrix are some of the most sought after relics in the world!

Another example of this historic poster has been on display in an exhibition held at Gallery 199 of The Metropolitan Museum of Art in New York! It hung on the same wall as the legendary Beatles Candlestick Park poster! Estimating the value of this Seattle Hendrix piece here is difficult and highly speculative due to it being the first to EVER appear in our auction. It will be interesting to see what value the market attaches to this Major Museum Rarity. The collectibles world will be watching as advanced collectors fight it out for the right to add this masterpiece to their collection! Bid accordingly as this may be your ONLY CHANCE to acquire one of the most desirable Hendrix concert posters EVER produced in remarkable condition!

Condition Details - 100% Original with no restoration. Tack hole top right two tack holes top left light tape pulls on back tiny nick top right edge few minor creases and dings lightly pushed corners. View the detailed high res photo of this lot. Click on the thumbnail photo to see an enlarged photo. Click a second time on the magnifying glass in the upper right corner of the enlarged photo. A super high res image with every millimeter will now be clearly displayed. For a personalized eyewitness examination call 410-464-6180 11:00 am to 6:00pm eastern.