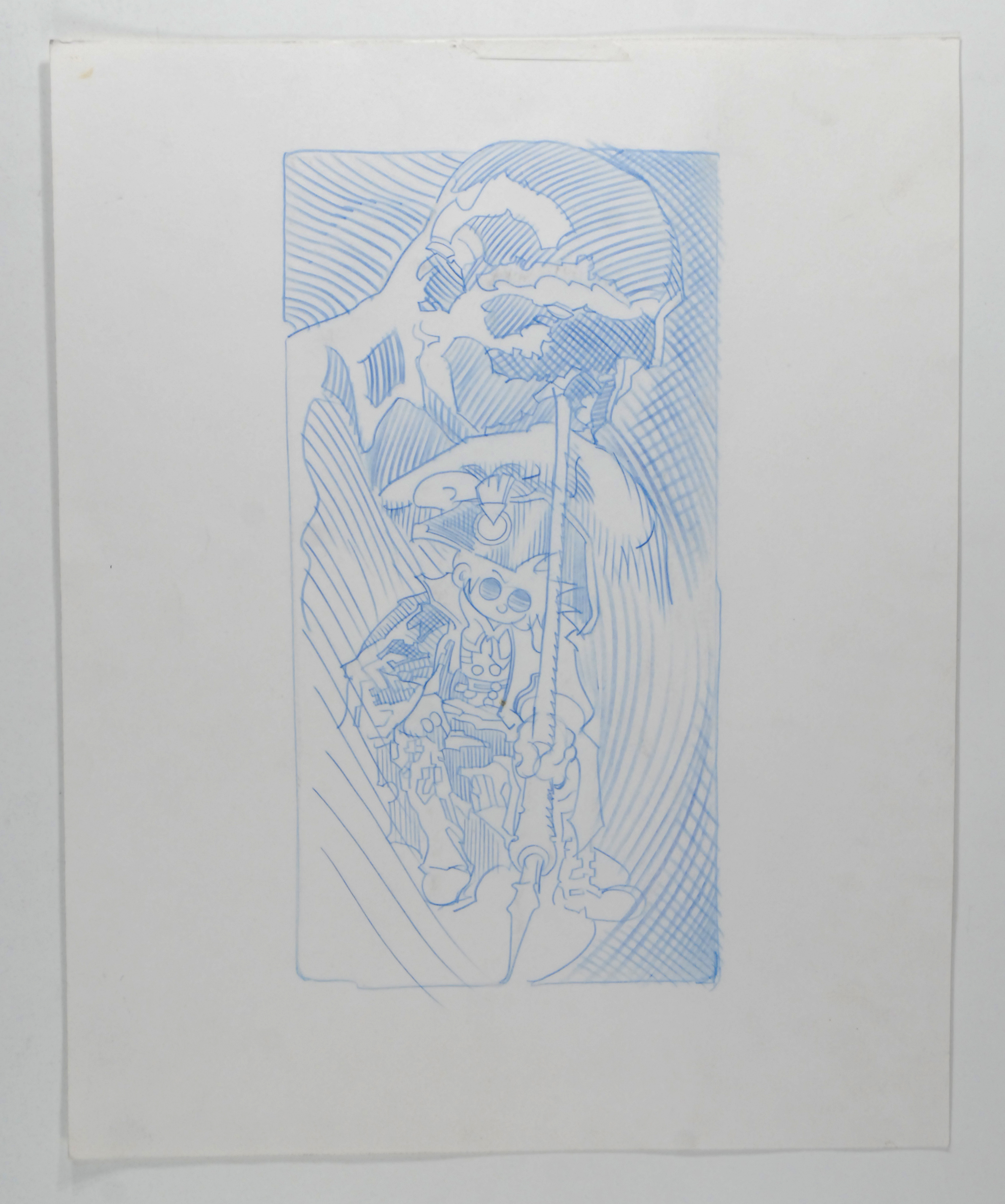 Here we have an absolutely extraordinary find! We are always tickled to come across ORIGINAL ART by the late great master Rick Griffin. Around the ZAP Comix era Griffin invented his pseudonym “Arthur Pendragon” a character he portrayed as himself in ZAP issue #11. What we know of the origin of this blue ink sketch is as follows:

Around 1985 Griffin became fascinated by passages in the Book of Revelations from the New Testament. He compared them with prophecies from the Old Testament and the mysteries of the prehistoric monuments at Stonehenge. He was also very interested in studying the ancient patterns etched in the ground in South America. What did all these things have in common? He wrote observations in sketchbooks and then created a character named “Arthur Pendragon” to help express these ideas in an underground comix format. The name came from old comic books which included King Arthur and the Knights of the Round Table stories.

The Arthur Pendragon character soon became stylized as an artist and years later in 1989 was the subject for Rick’s popular & widely known “Art And Death” black & white print. This early preliminary blue ink sketch exhibited here most likely goes back to 1985 when Rick first began studies of the character however the exact date of this original art is unknown. It is unfinished and not signed. This piece belonged to the artist and was subsequently acquired by Jacaeber Kastor a known collector of Griffin’s work. A black and white pen & ink drawing original Griffin art piece exhibiting the Pendragon character realized $2300 in our auction last year. A unique treasure in its own rite this piece of original art is ONE OF A KIND and will not surface again!

Condition Details – This original art is not graded. 100% Original with no restoration. View the detailed high res photo of this lot. Click on the thumbnail photo to see an enlarged photo. Click a second time on the magnifying glass in the upper right corner of the enlarged photo. A super high res image with every millimeter will now be clearly displayed. For a personalized eyewitness examination call 410-464-6180 11:00 am to 6:00pm eastern.

*****This piece is available for inspection at our gallery by appointment. *****