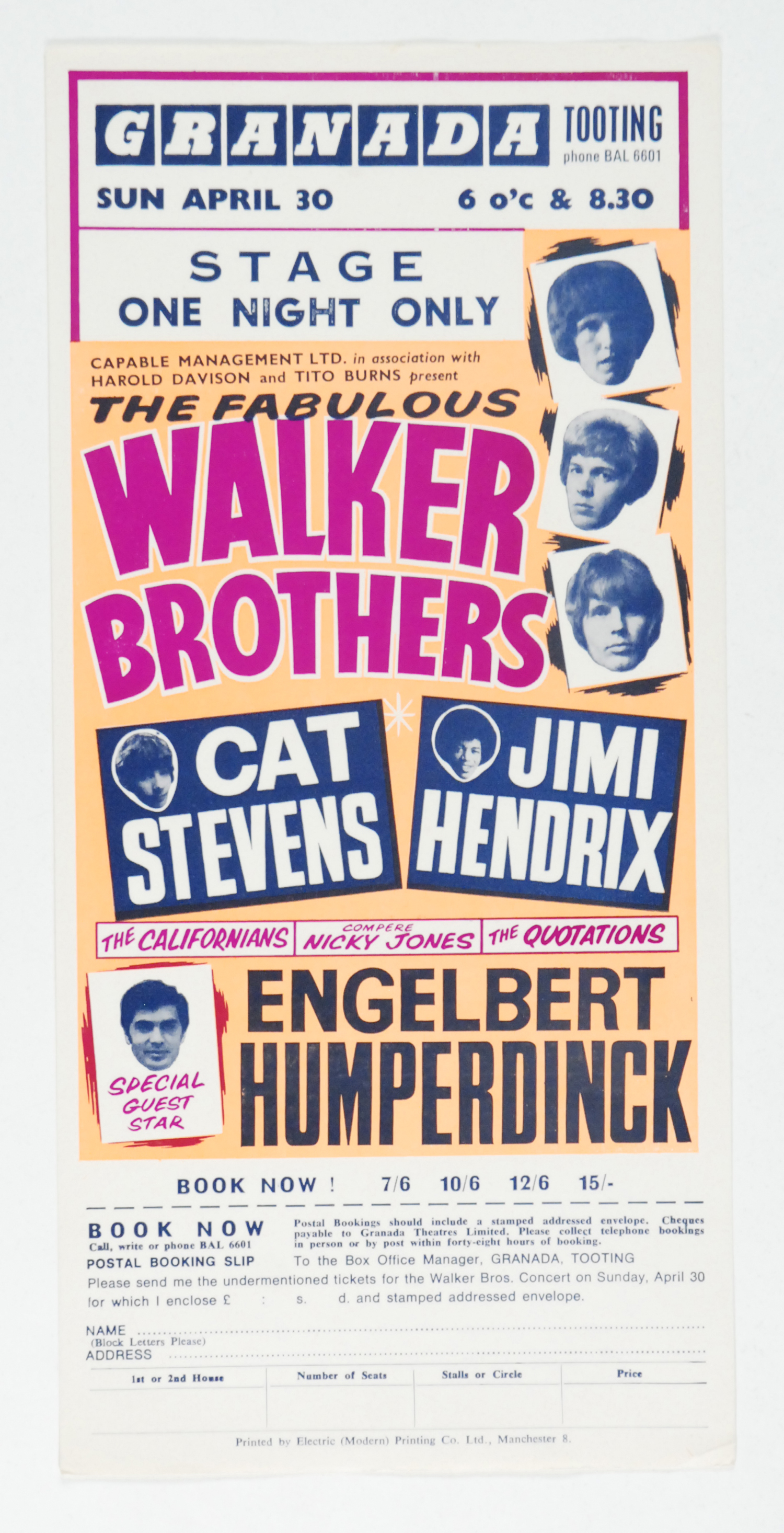 We've only offered this rare handbill once before in our auction and this is the FINEST QUALITY example we've ever seen! Here we have the JIMI HENDRIX EXPERIENCE and Cat Stevens on the same handbill with Englebert Humperdinck. Stories have been passed down for generations about this show.

It was early ’67 and the Jimi Hendrix Experience were just entering their rise to stardom. Noel Redding recalls in several interviews this show had a “bad crowd” and the place was mobbed with screaming hysterical girls. He said “We got ambushed and mauled going into the gig. Girls in the audience would scream our names louder than we could play our songs.” Apparently Scott Walker of the Walker Brothers had to be rescued when they clung desperately to him as he sang. In sensational scenes during their performance dozens of screaming and weeping girls were dragged to the door and thrown out. Many more had to be treated by St John Ambulance Brigade workers after they had fainted. When the Walkers came on stage the screams reached fever pitch and hundreds of fans surged to the stage and threw embroidered cushion scarves and handkerchiefs on stage.

It is also widely known from various interviews with friends of Hendrix that after the show the band headed for their hotel but the hotel manager took one look at them and told them that no arrangements had been made. After being turned away from all the other hotels in Blackpool they finally found a bed and breakfast at 6 am. “Jimi lost a lot of hair to girls with scissors and Mitch Mitchell received leg injuries.”

Jimi Hendrix material is one of the most popular treasures in the collectible market today. This original historic gem is a gold nugget to the early Hendrix collector! In July 2018 a lower graded "Extra Fine 69" example reached $1150 in our auction. In any other collectibles market this handbill would be worth many multiples of the previously sold example. It will be interesting to see what premium the market attaches to this superior example now.

* A 20% Buyers Premium will be added to the final hammer price of this lot.*