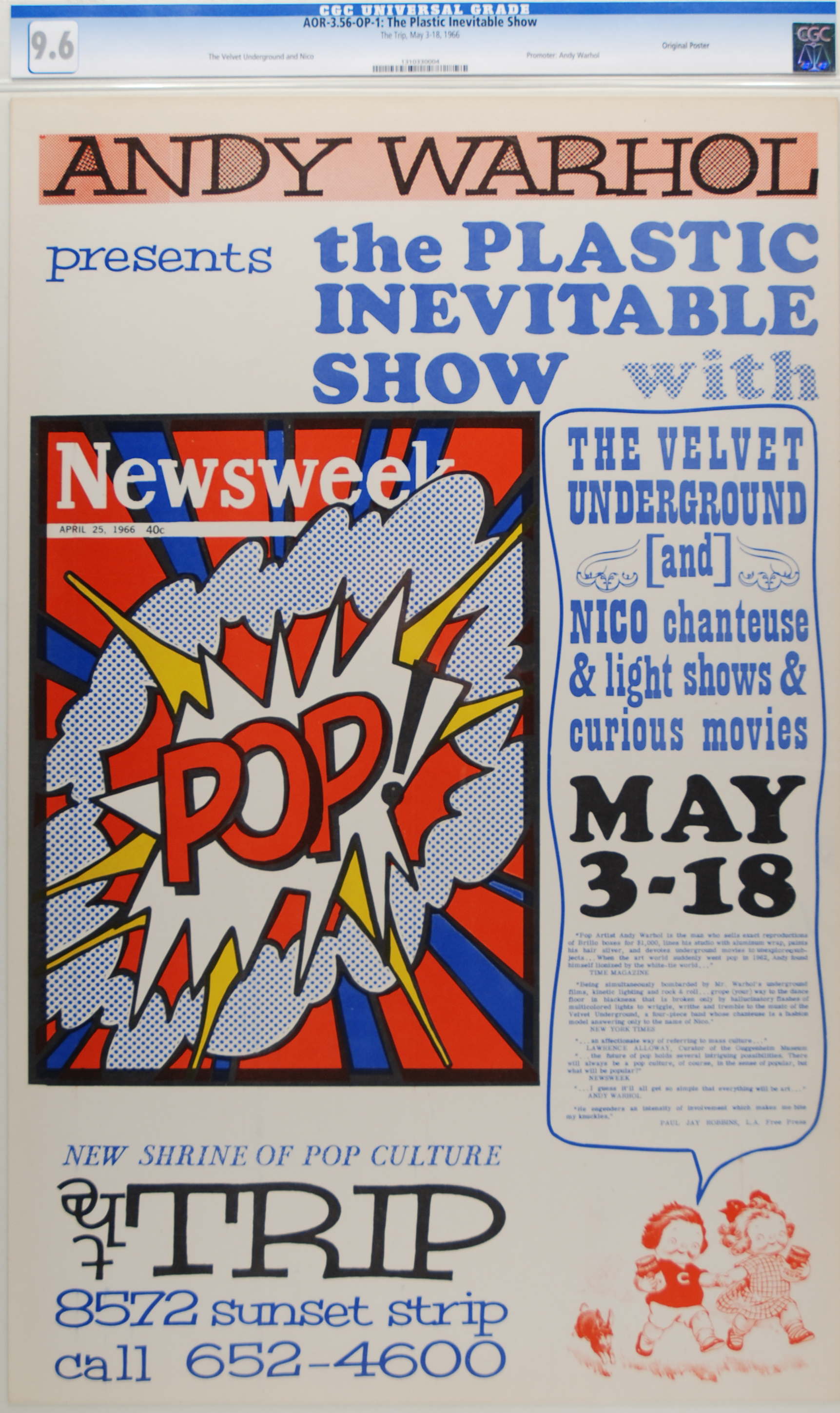 This is without a doubt one of the most desirable concert posters from the 1960's. It is featured in The Art of Rock plate # 3.56. Rarely if ever does one collectible have so many things going for it on so many levels.

This was one of the most notorious events in the history of the L.A. Rock scene. Many Hollywood celebrities were in attendance. Unfortunately the two week run was shut down after three days by the sheriff’s office for disturbing the peace. According to accounts The Mothers of Invention opened the show and were received with great praise while the Velvet Underground were booed and heckled.

But enough with how great looking this poster is how cool the lineup is and how impossibly rare it is. Those facts alone would make this one of the most desirable concert posters of all time. But let’s get down to the bare facts. THERE IS NO BIGGER NAME IN THE ART AND COLLECTIBLES WORLD THAN ANDY WARHOL. Period. It’s all you really need to know. Because that fact which is indisputable will in the long run be the overriding fact that determines the future value and desirability of this poster.

This lot is more than just a concert poster. There are literally many thousands of serious Warhol collectors around the world that would love to own this poster. None of these collectors even know that it exist. Why?  Because very few are knwn of today! If they did it would easily be a 6 figure artwork. Someday it just might hit that mark.

Literally BILLIONS of dollars of wealth  have been created by Andy Warhol. Those lucky enough to acquire one of his early pieces for a song have become multi millionaires. Those that had the foresight to buy his work in quantity now have solid 9 figure $100 000 000+ net worths. That’s right hundreds of millions of dollars have been made by single collectors with Warhol.

There is nothing theoretical about this it is undisputed fact. Which brings us to the opportunity at hand. We have tracked just 4 other auction appearances of this amazing poster in the past 10 years. The most recent appearance was an example that was NOT independently certified or graded by CGC. It was cataloged as having a couple of tiny corner bumps. It brought $14 087 1 year ago on 4/7/16.

This is the first CGC graded example to ever appear at public auction. It is also the finest quality example we have ever seen or heard about. It is superb in all respects with absolutely no signs of handling.

In regards to valuation please consider this: The Andy Warhol BG-8 Fillmore Auditorium poster is now worth about $10 000 in 9.6 or better condition. The poster offered here is at least 10 times rarer—and many would say 10x cooler—than the Warhol BG-8. But the LA Trip Warhol does not trade for anywhere near that type of premium. Which means that this poster is a huge bargain no matter what price it brings.

Are you are a serious poster collector that always wished they could afford World Class art? Are you an art collector that may be interested in owning just one really cool and ultra-rare historical poster? No matter who you are this is a poster that makes people say “Wow” whenever it is viewed. Bid accordingly.