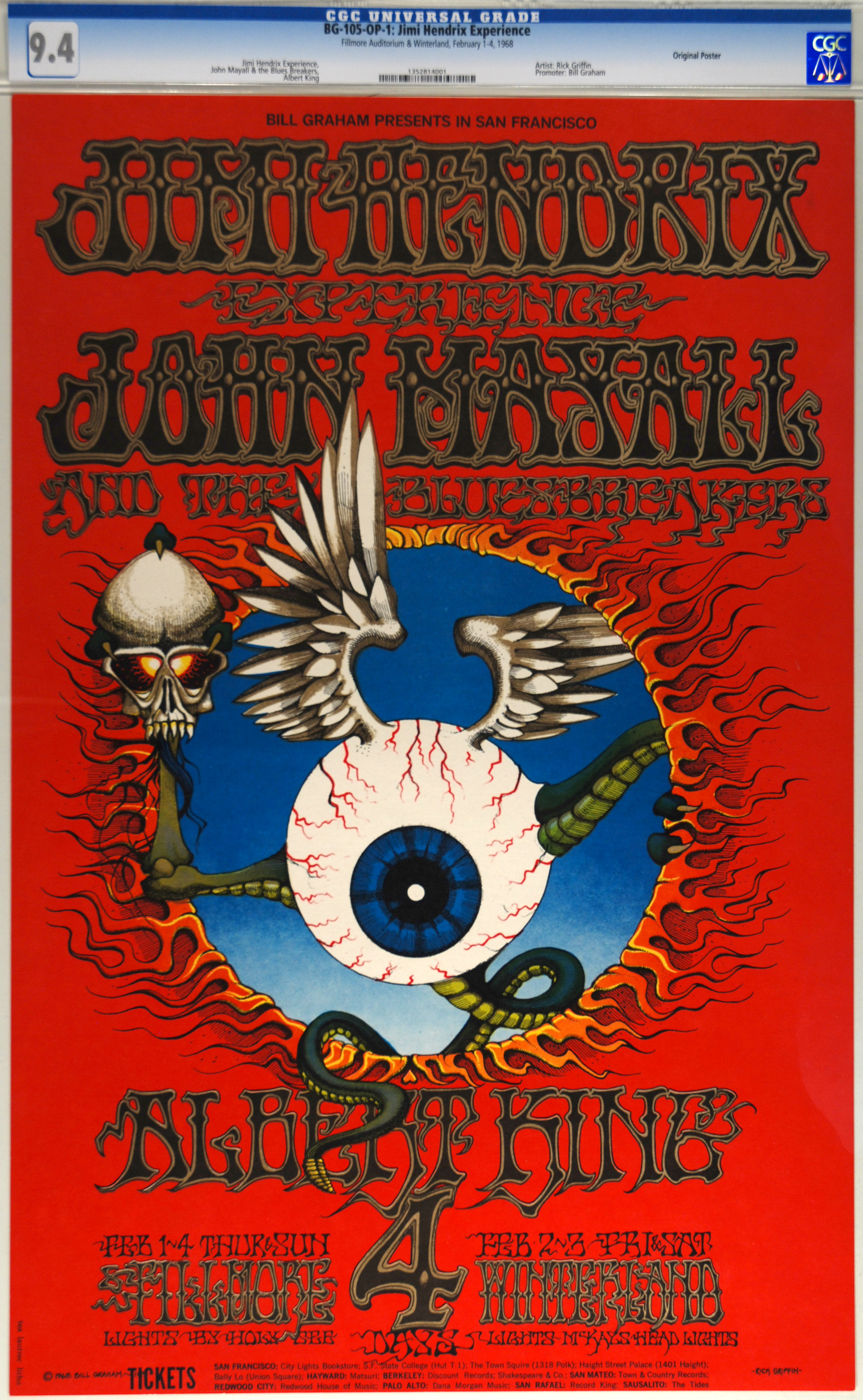 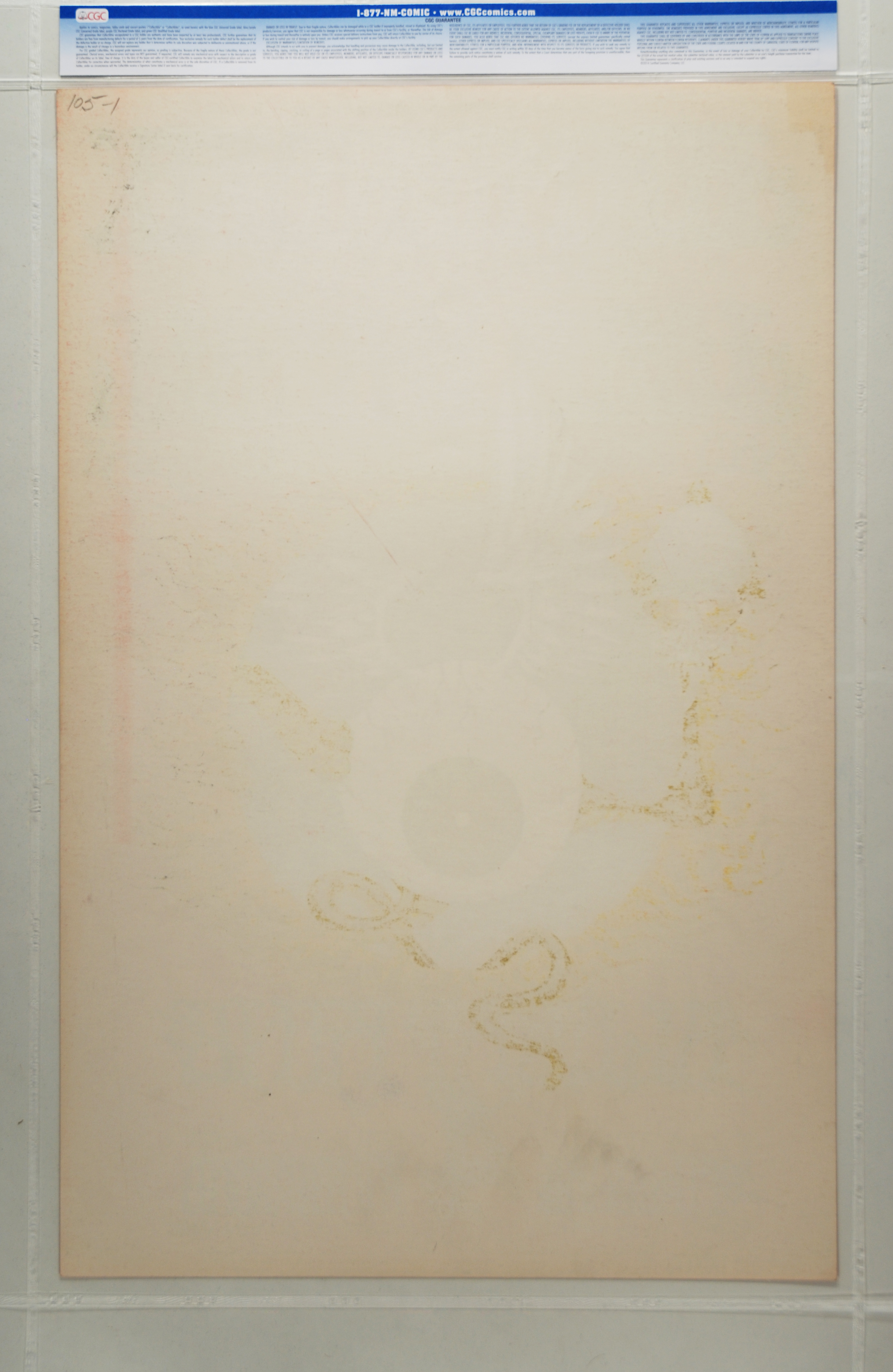 This lot offers what is considered by many collectors to be the most famous concert poster from the 1960’s Rick Griffin’s masterpiece BG -105. This treasured museum piece represents what is arguably the best artwork ever rendered for a rock concert poster.

This poster works on every level. It was created by the most inventive artist of the genre promoting the most striking musician of the era at the most famous venue of all!

The story behind the poster is that promoter Bill Graham dropped the ball the first time Hendrix played the Fillmore by placing the groundbreaking guitarist THIRD on the bill (BG-69).  The next time Hendrix came around it was made clear to Graham by Hendrix management that he needed to make up for his previous lack of judgment. Of course he went straight to Rick Griffin to create the best possible work of art. The rest is history.

The specimen offered here is superb in all respects and can be described as DEAD MINT. It is the FIRST and ONLY copy to appear at public auction that has been independently authenticated and graded by CGC as being in Mint Condition! This means of course   there are no pinholes cuts tears nicks or restoration of any kind. We have examined every millimeter of the poster UNDER MAGNIFICATION and can find NO FLAWS on the front. The corners are pinpoint razor sharp and the colors feature 100% full saturation. Totally fresh. Totally original. Off the market since the 1980’s.The back has “BG105-1” written in pencil and a slight spot of ultra-light toning again on the back both in the upper right corner.  That’s it!

CGC is legendarily tough on the back of posters and also on expensive posters. In our opinion erasing the pencil would raise the grade to at least to 9.6. We invite you to keep clicking on the image and on the magnifying glass in the upper right corner to see a super-sized high definition photo that will reveal the perfection of this poster to yourself.

In today’s market totally original copies of the BG-105 with 1 tack hole in each corner -WITHOUT CGC GRADING- routinely bring $7000 - $8000 at auction. We have identified two Mint copies that have appeared at auction in the past 10 years both which were sold many years ago. On 2/16/12 one Mint example brought $19 550 and another Mint example brought $15 525 on 10/21/12. Both posters had small problems that were more significant than the pencil notation and light toning spot on the reverse of the specimen offered here. Of course neither was independently graded or authenticated by CGC so we don’t know if other problems were neglected to be mentioned.

To perhaps get an even better understanding of current value please consider this: The only San Francisco Ballroom concert poster that is equivalent to the BG-105 in fame desirability and artistry is the FD-26- The Grateful Dead Skull and Roses. Like the BG-105 examples of the FD-26 that are totally original with one pinhole in each corner bring around the same as the BG-105 $7500.

A beautiful example of the FD-26 that was cataloged as “Virtually Perfect” but that had been according to the cataloger “professionally cleaned to remove toning” (who knows what grade CGC would have assigned?) recently brought $38 501 at auction on 12/4/16. Like the BG-105 offered here this FD-26 was the finest to appear at auction in many years.

Since these two posters have always been mentioned together valued about the same  held in the same esteem and appear in Gem Condition in about the same frequency it will be interesting to see what this fabulous Trophy Piece realizes. Regardless of what value the poster realizes now one thing can be certain -- the appreciation and appeal of this poster will continue to grow with each passing year!