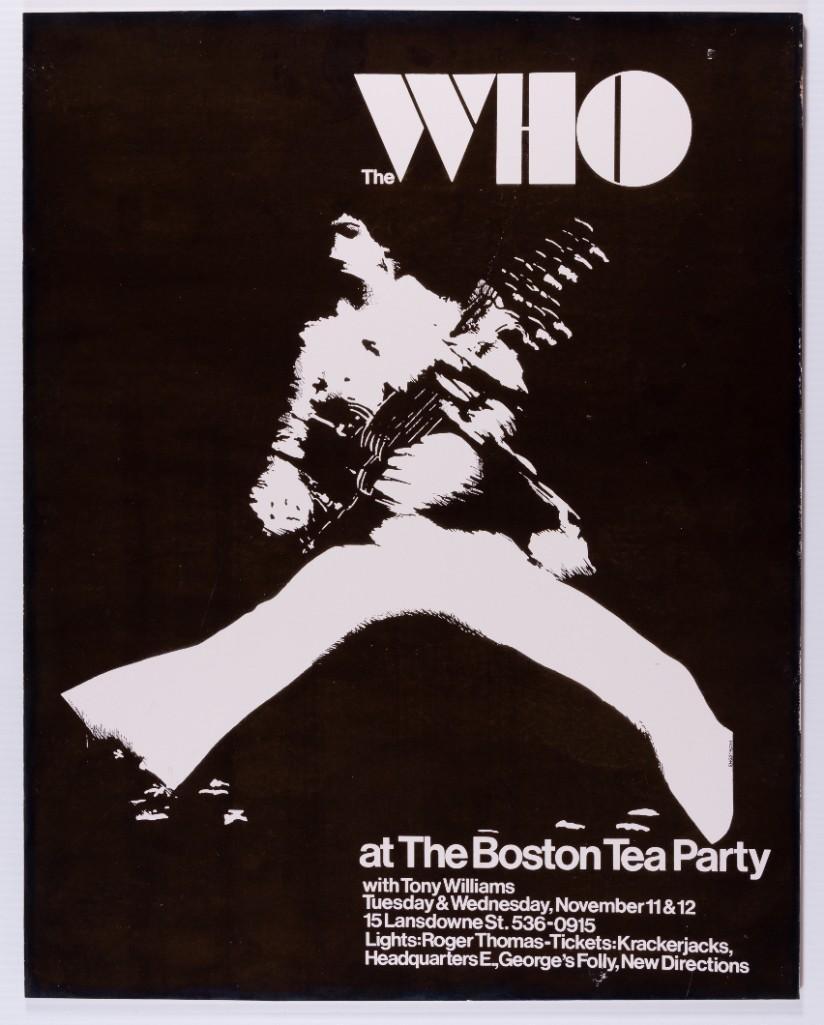 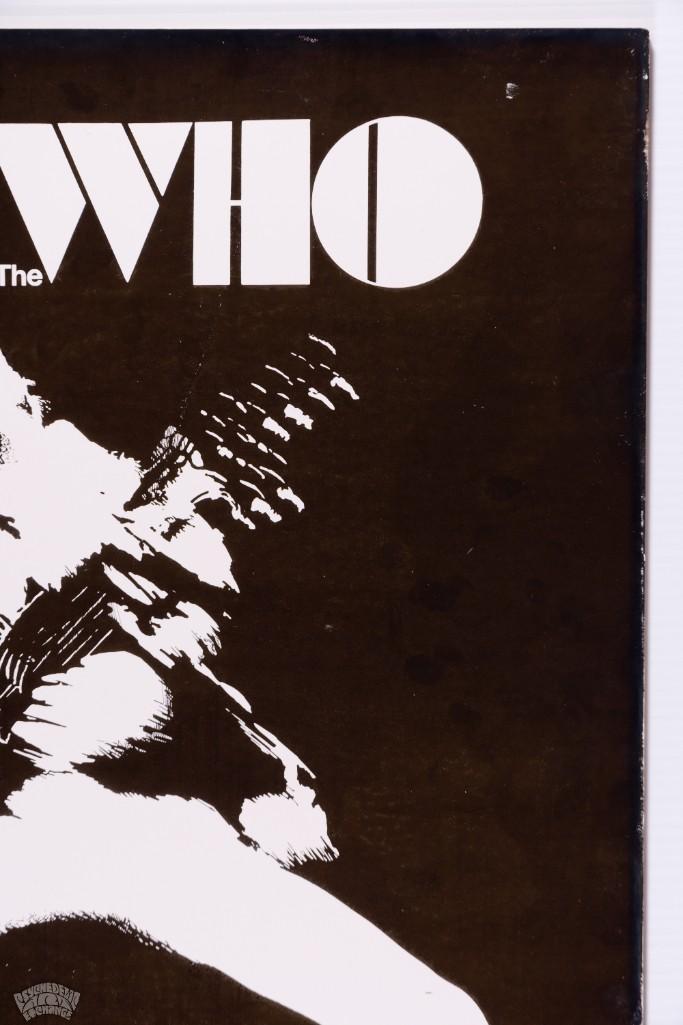 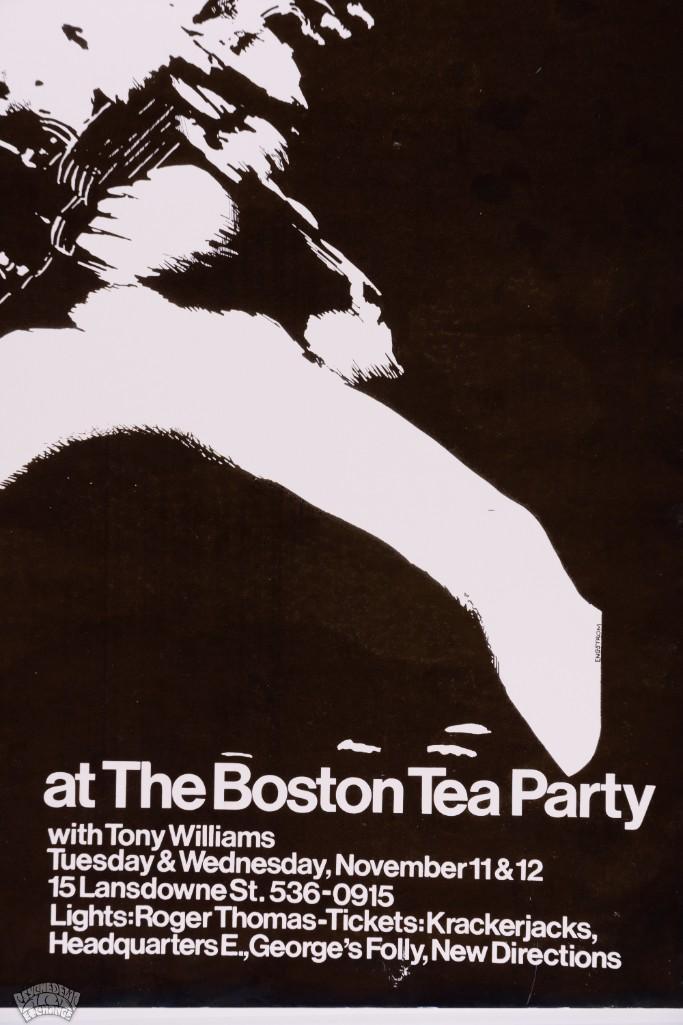 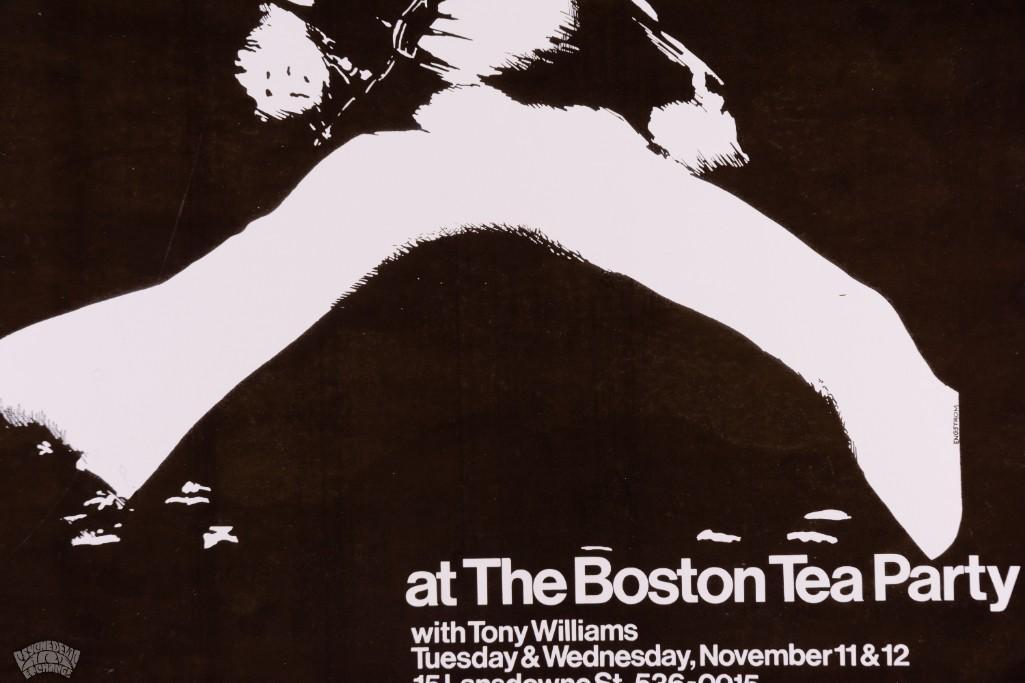 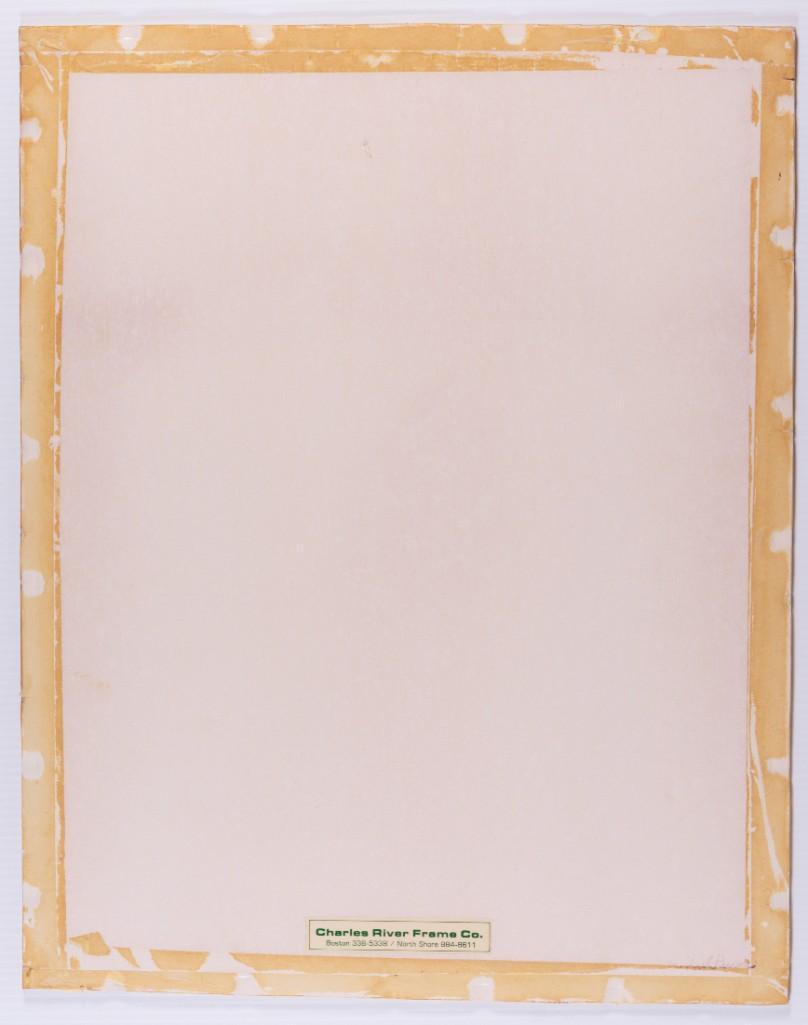 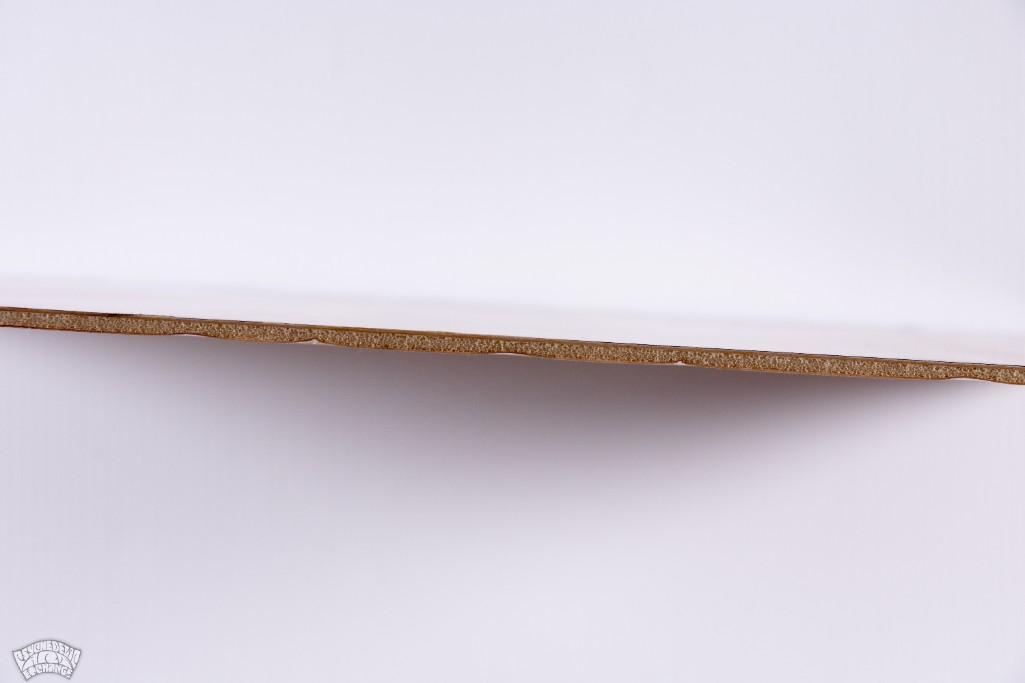 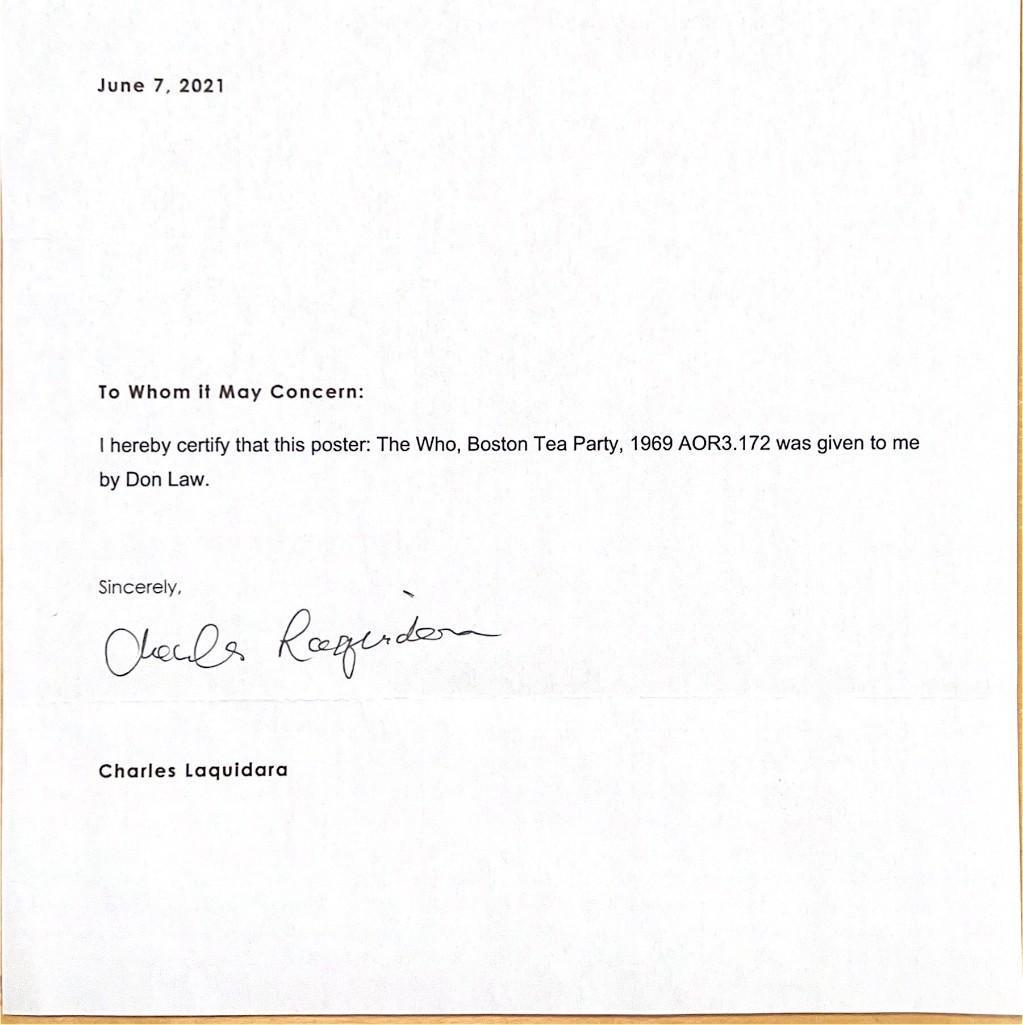 Psychedelic Art Exchange is pleased to offer a truly scarce item from the estate of renowned Boston area disc jockey Charles Laquidara,whose show "The Big Mattress" was broadcast on WZLX from 1969-1996.

When this consignment was offered to PAE, we knew we had acquired a special item that would appeal to the most advanced concert poster collectors. We were quite familiar with the poster. As auctioneers of concert posters for over 13 years, we have sold the poster several times. The original Who Boston Tea Party poster is one of the most prized posters of the 1960s concert poster genre. The primary poster grading company, CGC catalogs the poster as AOR 3.172 (Art of Rock Plate 3.172). The image is of The Who's Pete Townsend in stunning black and white. The illustration captures the guitar hero frozen in his signature mid-air leap. Super powerful imagery indeed.

The Who,at the time of this concert were at a creative high point. Having released the epic rock opera recording "Tommy" in May of '69, the Band was touring tirelessly behind the album and amazing audiences in their wake. The band's historic performance at the Woodstock music and arts festival is an audio snapshot of the 1969 Who at the top of their game.

The Boston Tea Party venue is one of those pockets of poster collecting that frustrate collectors and dealers alike. The print runs were minuscule so the survival rates are painfully low. The hottest pieces were absorbed into top collections decades ago and rarely come up for sale. There is no official cataloging reference material for the venue that we are aware of. Posters like the one here were printed on inexpensive paper that pretty much disintegrates over time if not cared for properly.

As mentioned, PAE has auctioned the original poster several times over the years and understood that the print offered here is 100% not identical to the concert poster mentioned above. There are several attributes that differ from the original. The dimensions and the paper are not exactly the same, the paper is not porous like the stock of the concert poster, rather it is printed on slick heavy stock. The poster is also dry-mounted, which ordinarily is problematic, however in this case the technique ordinarily intended for low-cost framing has intentionally preserved the artifact. We have confirmed the poster was offset printed as was the gig poster.

If not for the ironclad provenance from the seller, PAE would have viewed this poster as some type of pirate printing, but the attached letter from Charles Laquidara was indisputable proof of its authenticity. Still in order to provide our PAE Lifetime Guarantee of Authenticity, we needed to establish that this was an original print.

The story of the poster is as follows. The original owner Charles Laquidara, was given the poster by Don Law,who t is a well known music industry magnate, but at the time was the manager of the Boston Tea Party. The poster was professionally framed and given as a holiday gift to friends of the club. Our research has revealed two other copies of this printing and we have verified that they are identical to this copy being offered. The paper and the dimensions line up and the sticker on the back of the foam core from the frame shop that mounted the poster is on the other copies as well.

Above, we have presented the facts as we understand them in an effort to help our buyers bbby providing the backstory of this poster. Bidders that require further explanation or additional information, please reach out to our customer support team and they will be happy to assist. Condition: Mounted on foamcore.