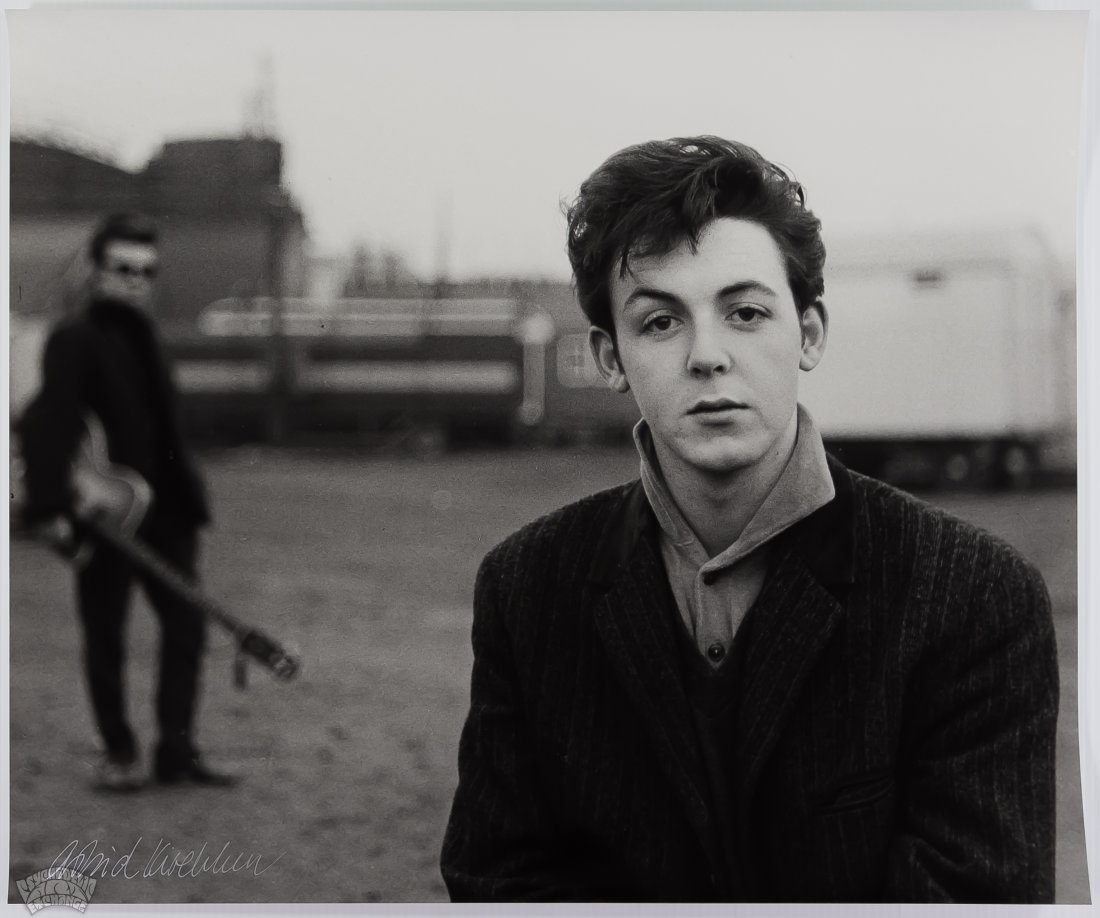 This photograph is SIGNED BY ASTRID KIRCHHERR!

When it comes to music memorabilia, most experts and advanced collectors agree that there is the Beatles…in a universe of their own…and then everyone else.

PAE is absolutely thrilled to offer the Collector Community a Large Format, Signed photograph from what is universally recognized as the single most definitive and important and famous photo shoot of the Beatles in their early, pre fame days. This large photo was produced using the gelatin silver printing process, most commonly used in black & white photography.

The previous statement is not an opinion, but a widely recognized fact. It’s our pleasure to break this historic offering down in fine detail so that everyone can fully enjoy viewing this photograph and appreciate the opportunity at hand.

This photograph of Paul McCartney was taken in October 1960 by German photographer, Astrid Kirchherr. At the time, the Beatles were nothing but a scruffy British bar band. On August 17, 1960, the Beatles arrived in Hamburg, Germany to play a 6 week residency at the converted strip club, Kaiserkeller, which by all accounts remained a seedy place frequented by sailors and prostitutes.

At this early date, The Beatles Included Stuart Sutcliffe on bass, and their new drummer, Pete Best, who joined The Beatles just days before the band’s arrival in Hamburg.

The photograph, in Kirchherr’s trademark black and white, was taken in front of a rollercoaster at a Hamburg fairground, and produced in a massive format measuring 18 5/16" x 23 1/2". The photograph is signed by Kirchherr, who recently passed away in Hamburg, at the age of 81 in May, 2020. Most importantly, Kirchherr’s photographs are widely considered to be the first ever professional shots of the Beatles.

What Astrid Kirchherr says about this iconic photo shoot:

“It was early in the morning, because I only used daylight. So the poor guys had to get up early. They only stopped playing at 4:00 in the morning, and we met about 9:00 or 10:00. They looked quite rough, having their har combed back with grease, really looking like rock and rollers, so I thought it would suit them the most between all these wagons and steel and rust”.

What George Harrison said about this iconic photo shoot:

"Astrid asked us if she could take some photographs of us and because we loved the idea that led to our first photo session, when she took us to the Hamburg Fairground. Astrid was totally responsible for that whole image."

What John Lennon said about their early Hamburg days:

"It was Hamburg that did it. That's where we really developed. To get the Germans going, and keep it up for twelve hours at a time, we would really have to hammer. We would never have developed as much if we'd stayed at home. I grew up in Hamburg, not Liverpool."

While Kirchherr’s photographs of the Beatles have appeared in museums worldwide, her influence on the Beatles went FAR beyond photography. Kirchherr is widely recognized as the person who gave the Beatles their famous mop top haircuts and image … creating a cultural phenomenon that has never been equaled!

What Rolling Stone Magazine says about about Kirchherr’s influence on the Beatles:

“Astrid Kirchherr, who died on My 15th at age 81, was more than just a photographer whose path crossed that of the Beatles at a crucial moment. As a friend to the band, she talked them into the mop-top haircuts favored by her art school friends. It’s fair to say that Kirchherr helped invent the entire idea of the Beatles.”

“Astrid was the one who influenced our image more than anyone else.”

Summary: A historic offering of a historic moment in Time.

Kirchherr’s recent passing, last year in May 2020, resulted in literally thousands of news stories and Kirchherr will always be remembered for taking the very first professional photos of the Beatles.

Two months ago, we sold a photograph of the entire band, from the very same photoshoot, and the same Large Format size, that realized $5,400.