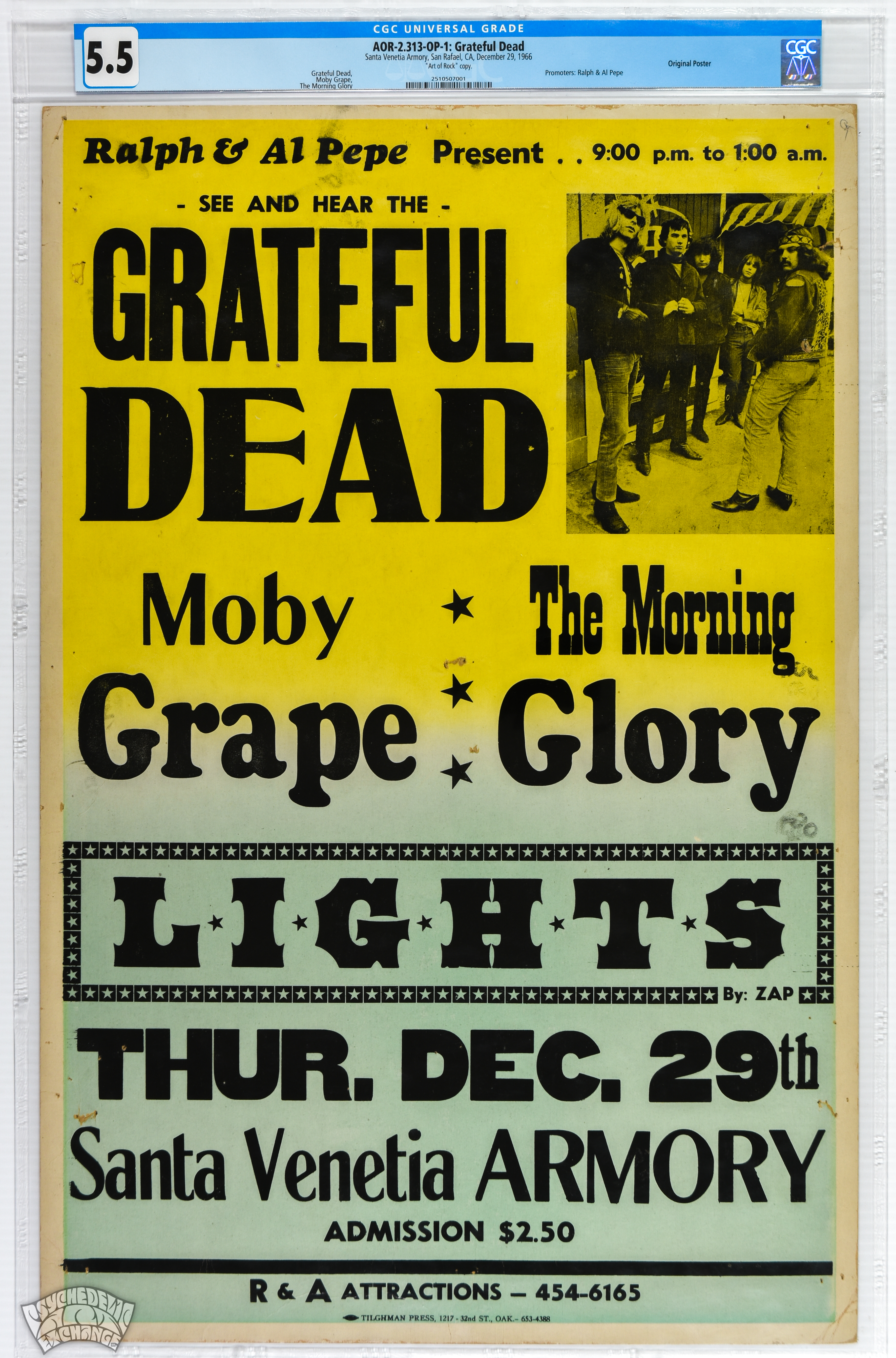 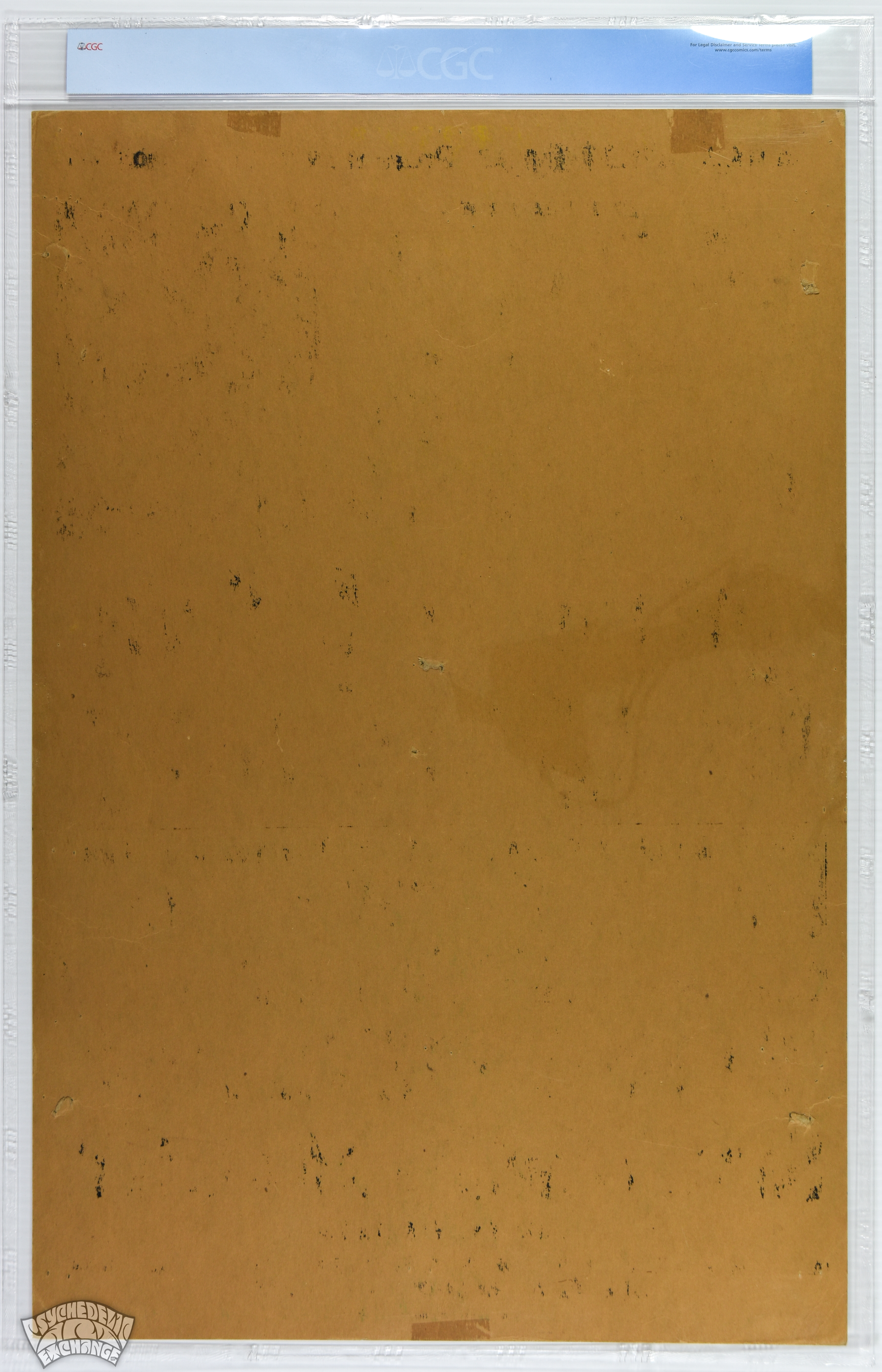 This example has the distinction of being THE “catalog copy” as is noted on the CGC certification label. This poster is featured in the” Art of Rock” plate 2.313 page 226!

PAE has reached a grand milestone with this special lot! Presenting for the very first time with CGC grading & authentication: A beautiful example of this legendary EARLY Grateful Dead Cardboard Poster from December 29th 1966 at the Santa Venetia Armory in San Rafael California.

Here is a cardboard rarity which will appeal to both Grateful Dead and Boxing Style poster collectors alike. The poster is the first and only independently certified copy known to-date and is in completely original condition with no restoration whatsoever. This unique example here also has the distinction of being THE “catalog copy” from the Art of Rock as is noted on the CGC certification label!

This super early Grateful Dead poster from 1966 catches the band as they were evolving from their primal beginnings as the “house band” for Ken Kesey’s Acid Tests to a fierce improvisational blues / rock band with a heavy psychedelic streak. Within a few weeks of this concert the Dead would travel to Los Angeles to record their debut album for Warner Brothers.

Although the band played most of their shows in San Francisco in 1966 this show was held just outside the city in San Rafael at the Santa Venetia Armory. This was a small National Guard armory in Marin County that according to speculation was also used as an early rehearsal space for the band.

The photograph featured on the poster is a rare early publicity shot of the Grateful Dead taken by Haight Ashbury photographer Gene Anthony. It catches the band trying to look serious while showing off their matching Beatle boots. The layout is typical of Boxing Style ads and the aesthetic of this poster is a noticeable exception to the psychedelic concert posters that were all the rage at the time.

"The letterpress editions are today some of the rarest Bay Area rock posters since by this time few such jobs were being handled by the older printing shops.” - The Art of Rock 1987.

The poster was printed by Tilghman Press of Oakland California. Tilghman Press was an early African American owned printing business responsible for creating a significant number of R&B posters in the ‘50’s and ‘60’s. They were known for quality work and this poster is no exception. The classic letterpress style matched with Tilghman’s characteristic split fountain printing knocks this one out of the park. Collectors of cardboard posters will be overjoyed with this genre crossing beauty.

Grateful Dead posters from 1966 are among the most demanded by experienced collectors. The Dead in 1966 were just having fun and never expected to become a cultural phenomenon. The Dead’s most famous poster FD -26-OP-1 “Skull and Roses” was also created in 1966. It has recently become the first Grateful Dead poster to cross the $100 000 auction mark a significant milestone for San Francisco Ballroom posters. Just a few years earlier you could find the best copies for $10 000-$20 000.

Though the FD-26 has set the pace for psychedelic concert posters bear in mind that it was believed to be printed in original quantities of around 2500-3000. In comparison this offering was printed in the dozens. To find one in any condition is a feat in itself. The CGC grader notes for this poster mention creases staple holes and small tears from the staple pulls. Additionally the grader notes also reference fingerprints as a flaw. For accuracy these are the result of the printing process not after the fact.

While considering grade as a factor it’s important to acknowledge these posters in the context of their original intent to be posted. They were pinned up for advertising and subjected to the elements. That they survived at all is remarkable. While it’s critical to recognize the technical grade it’s equally important to consider overall eye appeal. Cardboard poster collectors will view this specimen at near the top of the scale. The inks are bright and strong the edges are complete with no tears or missing paper. The cardboard is stiff and strong and the borders are full with sharp corners.

Many collectors will agree that this poster has gone down in history as one of the most highly sought after early Dead posters of them all. Some may even say this is the ULTIMATE early Dead poster. We at PAE believe this poster is in a class of its own in terms of scarcity and condition. This lot represents a golden opportunity for collectors to own one of most unique Grateful Dead posters of all time in top condition!

Condition Details - 100% Original with no restoration. Staple holes creases staple pulls ink fingerprints from original printing process. View the detailed high res photo of this lot. Click on the thumbnail photo to see an enlarged photo. Click a second time on the magnifying glass in the upper right corner of the enlarged photo. A super high res image with every millimeter will now be clearly displayed. For a personalized eyewitness examination call 410-464-6180 11:00 am to 6:00 pm eastern.