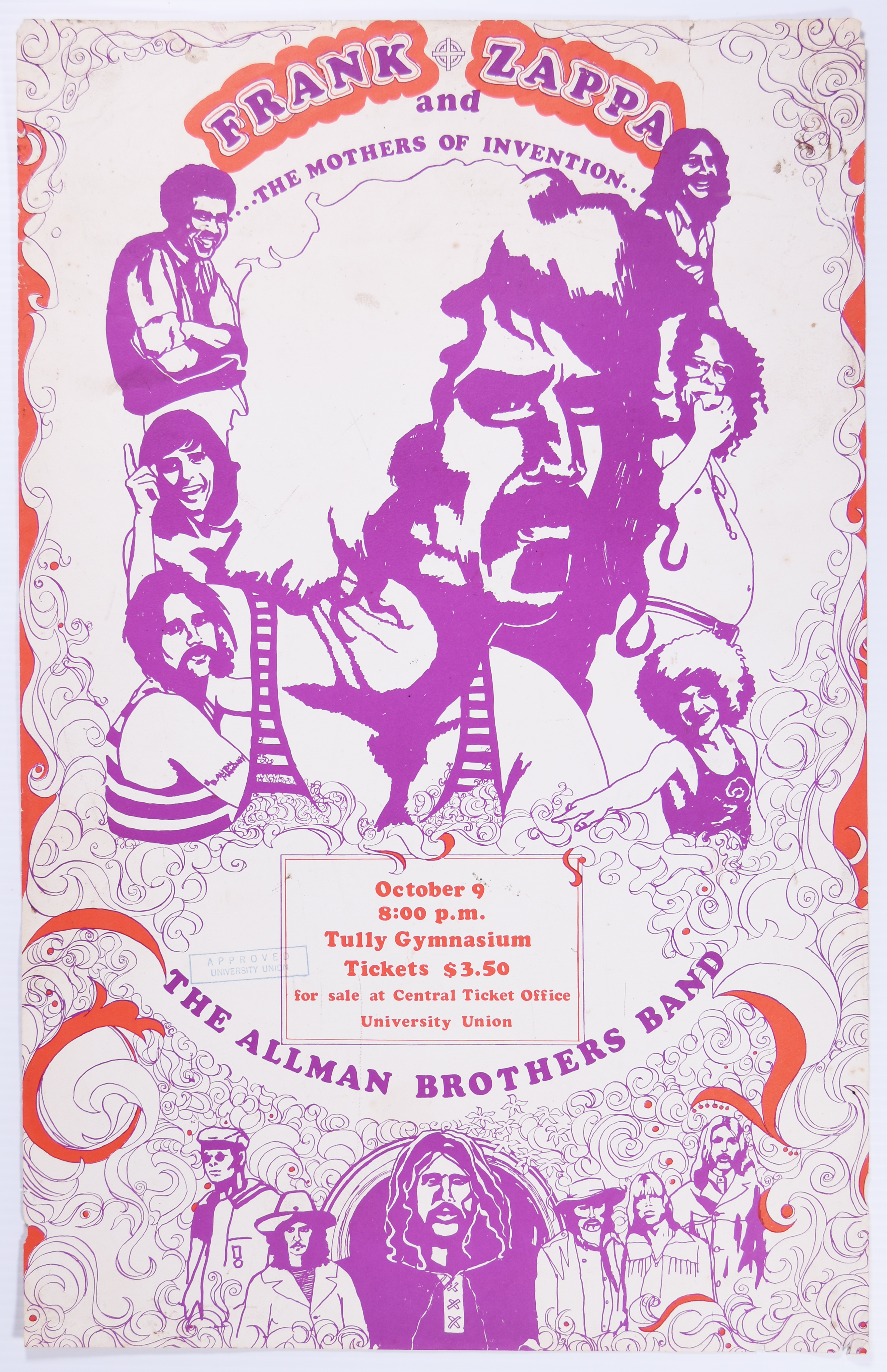 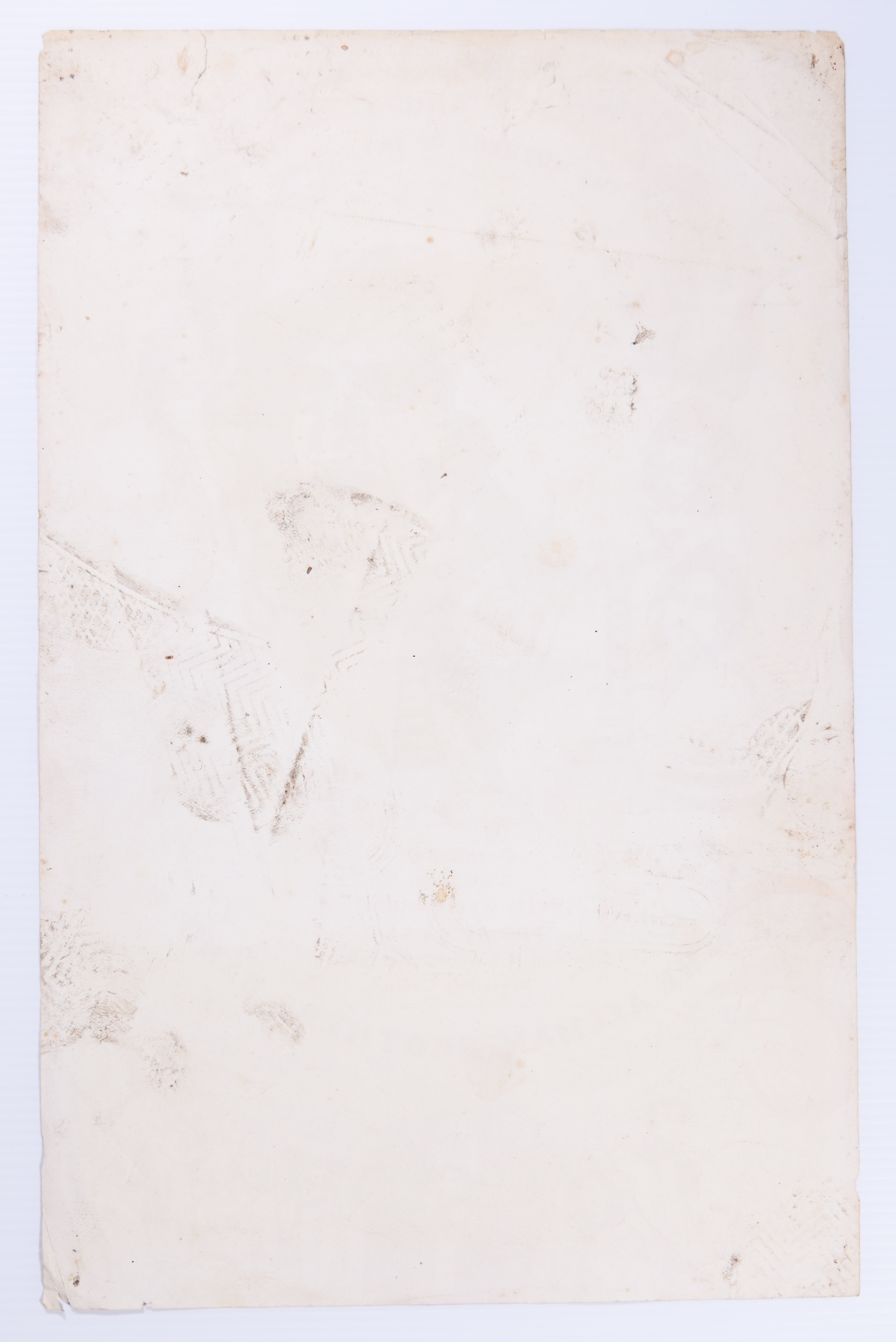 Behold! Quite possibly one of the greatest combinations of legendary talent to ever grace the same stage on the same night! In late 1970 both FRANK ZAPPA AND THE ALLMAN BROTHERS BAND shared the bill at this concert on October 9th.

This event took place at Tully Gymnasium on the campus of Florida State University in Tallahassee Florida. This poster exhibits the original UNIVERSITY STAMP in the left bottom quadrant of the design!

The late great Duane Allman was in top form with the Allman Brothers while having the chance of a lifetime to be the “opener” for Zappa who was already a seasoned performer for several years now. The history behind both artists during this time is both critical and fascinating which adds to the importance of this poster.

Due to financial reasons in 1969 Zappa disbanded the Mothers of Invention lineup and released his acclaimed solo album "Hot Rats". In early 1970 he formed a new version of the Mothers which also added three members of The Turtles. They toured extensively that year and the new Mothers debuted on Zappa's next solo album "Chunga's Revenge". It was a high creative peak for Zappa and his musical ideas.

The Allman Brothers had just released their second album "Idlewild South" and enjoying moderate creativity with their music as well. They also toured continuously in 1970 performing over 300 dates on the road while traveling in a Ford Econoline van. Very little material from the early years of the Allman Brothers Band still exists today. Original material from the Duane Allman era of the group is highly desirable and especially targeted by collectors! Especially when Duane is pictured on the poster like this one here!

We have never seen this super rare Frank Zappa & Allman Brothers original poster surface in our auction until now! Lets celebrate Zappa and the Mothers - just in time for MOTHER'S day!

An important mention must be noted about estimating the value of this incredible rarity. This is the first specimen of this poster to appear in our auction. It's no secret that early Allman Brothers material is WHITE HOT in today's marketplace. The severe rarity and today's tremendous demand overwhelms the tiny handful of early Allman Brothers items that have survived the past 5 decades. Combine that with the fact this poster also features Frank Zappa and the Mothers of Invention and the fact you could EASILY wait a decade or two or MORE to see this opportunity present itself again and you have a Museum Rarity that can truly be called priceless. While we will leave it up to the market to determine value we can say that it's times like this that experienced collectors consider a tremendous value when compared to any other collectible in the world today.

Condition Details - 100% Original with no restoration. Heavy creases minor paperloss 1 1/4" tear top edge 1/4" tear bottom right foxing stains and surface residue. View the detailed high res photo of this lot. Click on the thumbnail photo to see an enlarged photo. Click a second time on the magnifying glass in the upper right corner of the enlarged photo. A super high res image with every millimeter will now be clearly displayed. For a personalized eyewitness examination call 410-464-6180 11:00 am to 6:00pm eastern.