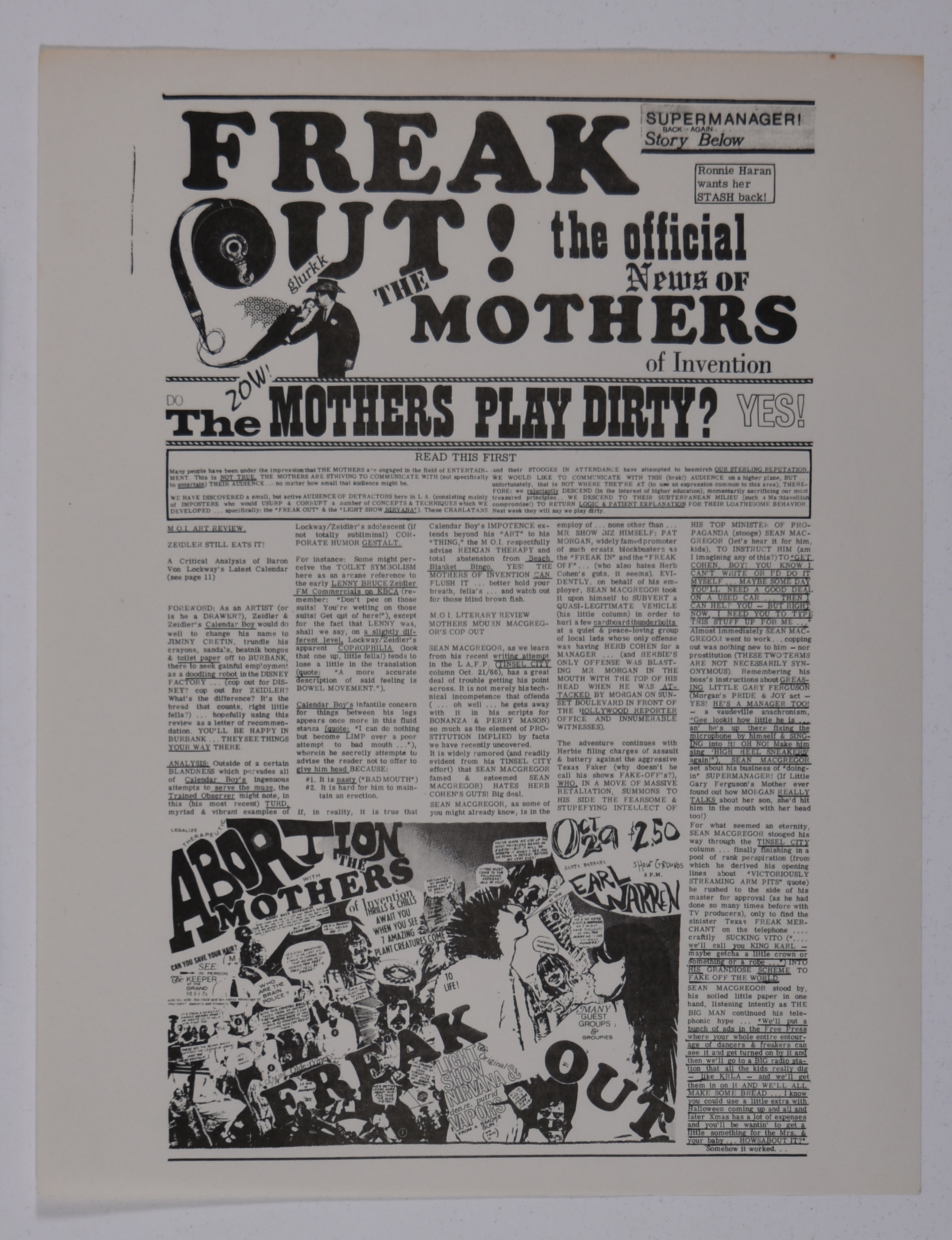 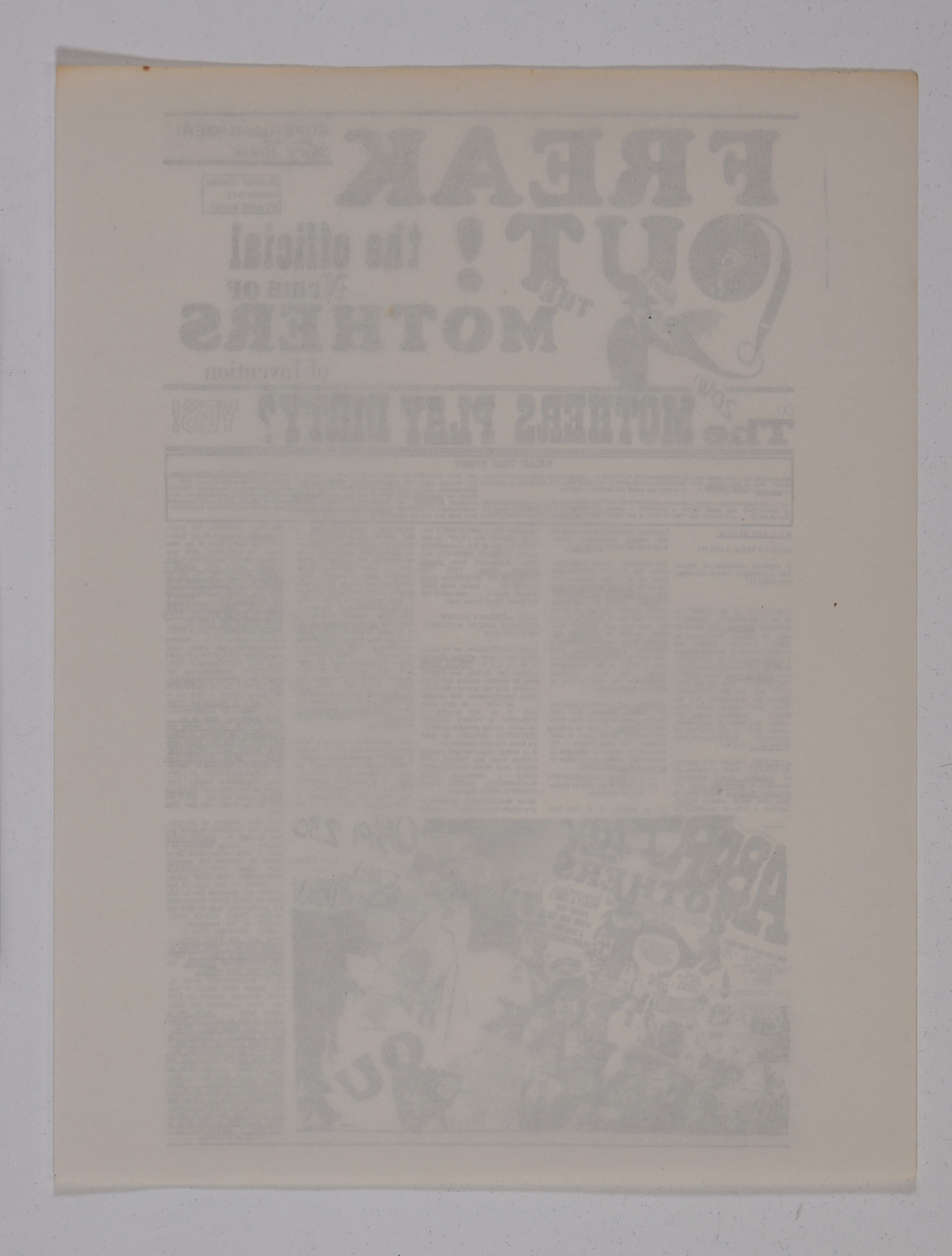 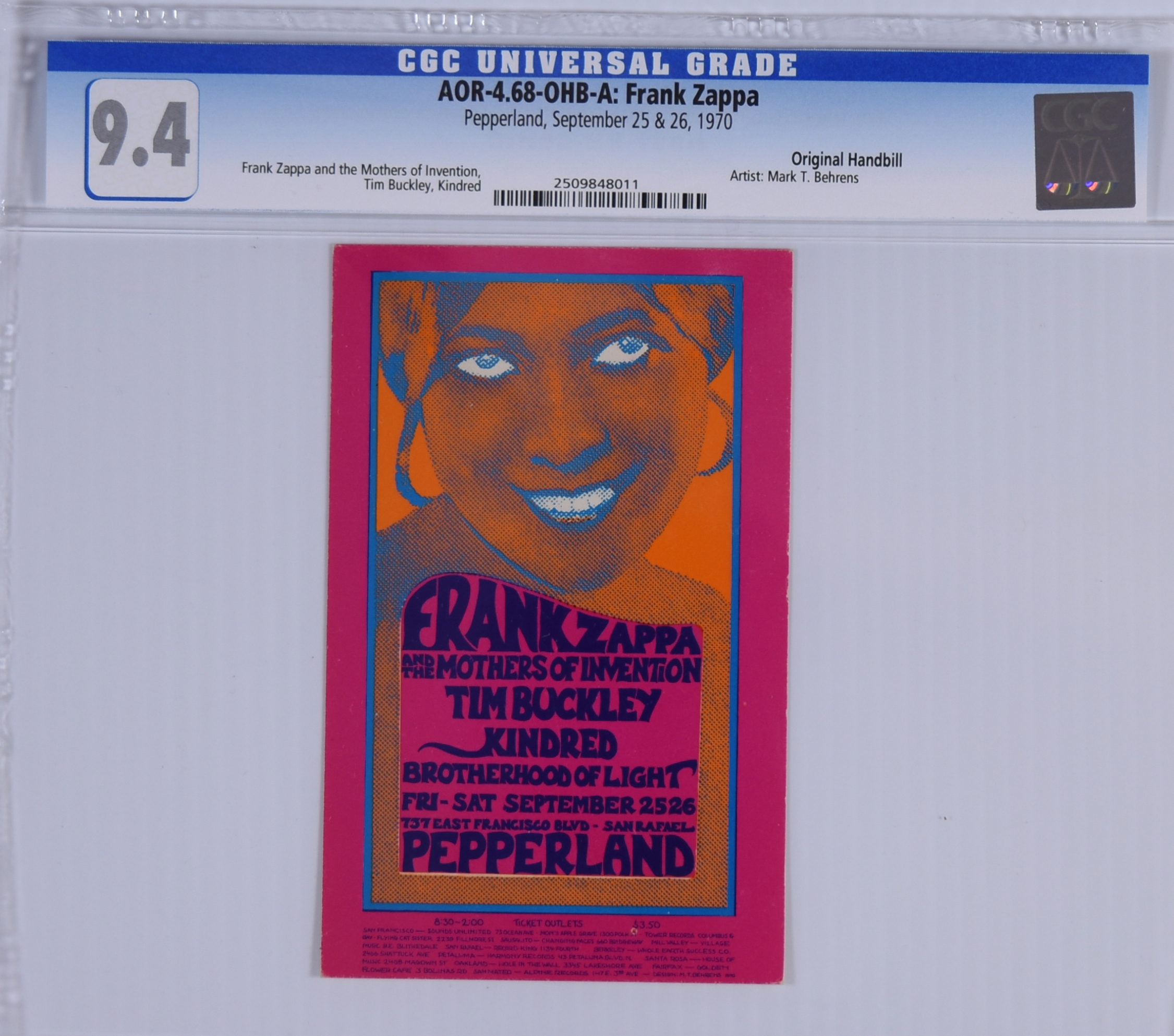 This is a collection of 2 High Quality Original Frank Zappa Handbills:

Freak Out! Frank Zappa & The Mothers at Earl Warren Fairgrounds 10/29/1966 PAE Graded Near Mint "89" 8 ½ X 11” Original Pre-Concert First Printing. Condition Details - Super clean with no nicks cuts tears or pinholes. A nick and tiny edge flaws on top edge. This is a true mother pearl of a handbill! It's from an october 1966 show at Earl Warren Fairgrounds in Santa Barbara a soon to be popular venue for other huge acts such as Jimi Hendrix Yardbirds Big Brother Led Zeppelin Blind Faith and more. This historic handbill is titled "Freak Out!" and is set up like a newspaper front page in design. It states at the top that it is the "Official News of the Mothers of Invention" and follows with several news stories featuring Frank's views on various topics. Zappa and the Mothers had just released their debut studio album "Freak Out!" in June of that year which was a sharp satirical expression of Zappa's view of American pop culture. This falls in line with why the layout of this handbill of the same name which reads like a newspaper. Also worthy of note the album was produced by Tom Wilson (popular for working with Bob Dylan in the late sixties) and it was only the second official DOUBLE rock album released. By the time the group performed this show at Earl Warren in October the material from this era was played to perfection. The desirability of this 100% original piece can not be understated. During our June 2018 Mega sale a lower graded example realized $384 in our auction.

Frank Zappa & The Mothers at Pepperland 9/25-26/1970 CGC Graded 9.4 3 1/2" x 5 1/2"  Original Pre-Concert First Printing. Artist: Mark T. Behrens. Condition Details - Museum Quality with no nicks cuts tears or pinholes. 100% Original with no restoration. The legendary Pepperland was a short-lived venue in the Marin County town of San Rafael that produced a series of excellent posters & cards in the early 1970's. This amazing Frank Zappa card features the Mothers at Pepperland with Tim Buckley and Kindred. Due to financial reasons in 1969 Zappa disbanded the Mothers of Invention lineup and released his acclaimed solo album "Hot Rats". In early 1970 he formed a new version of the Mothers which also added three members of The Turtles. They toured extensively that summer and into the fall including this run in San Rafael. Soonafter the new version of the Mothers debuted on Zappa's next solo album "Chunga's Revenge" released four months later.

This lot contains multiple items. View the detailed high res photo of this lot for condition of each item. Click on the thumbnail photo to see an enlarged photo. Click a second time on the magnifying glass in the upper right corner of the enlarged photo. A super high res image with every millimeter of each piece in the lot will now be clearly displayed. For a personalized eyewitness examination call 410-464-6180 11:00 am to 6:00pm eastern. This lot is also available for your inspection at our Gallery in Baltimore Maryland.